In the last couple of Monuments for the Future inspired blogs, we’ve looked at the hillforts and barrows of the North York Moors. This time we’ll ponder another monument type which often springs to mind when we think of prehistoric archaeology visible in the landscape today: standing stones.

The North York Moors has an abundance of stones set upright in the ground for various reasons. Not all of these stones are prehistoric: indeed the Historic Environment Record records 161 individual stones across the park recorded as ‘standing stones’, of which 129 are of likely prehistoric origin. But there are a further 1459 monuments recorded as ‘boundary stones’ with a medieval or later explanation. The distinction between standing stone and boundary stone is not always completely clear, as we shall see below, but these figures do mean that erected stones of one sort or another account for approximately 8.5% of all recorded monuments in the North York Moors. Let’s not even think about the number of historic gateposts out there…

People started to erect standing stones across the country in the late Neolithic period (2500-3000 BC), and carried on doing so up to the end of the Bronze Age around 700 BC. Like much of prehistoric archaeology, it can be very hard to know what was going on and to impose definitions on these big lumps of rock. Sometimes multiple stones are used in conjunction to create circles (often referred to as henges) or other shapes, or long rows stretching hundreds of metres, and then others stand alone. But why were people doing this?

It’s a long running joke in archaeology that if we don’t understand the function of a feature then it must be part of a long forgotten ritual, but for many surviving prehistoric features it seems that that is the most likely explanation. Some stones are associated with other features, such as a large slab next to a bridleway over Danby Rigg which forms part of a cairn under which Victorian archaeologists found deposited urns. Others accompany barrows, pits or stone-lined chambers. The common theme so far is death and burial: were people using standing stones to mark the spots belonging to the dead? were they a commemoration, in the same way we use gravestones and memorials today? or perhaps the stone warned others not to get too close… 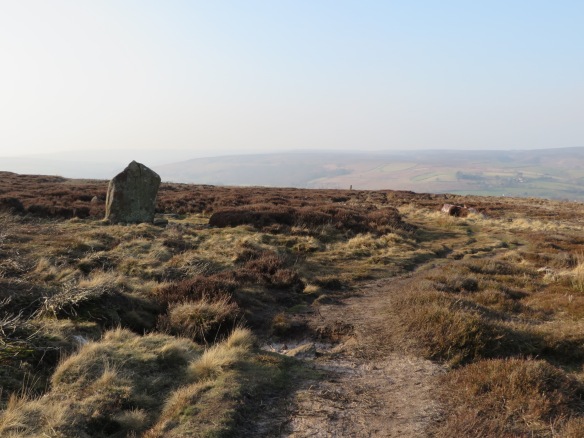 Whilst many stones may have been raised to honour the dead or perform ritual practices around, others may have had a more mundane but useful purpose. If you’ve been out and about on the moors you’ll know how disorientating they can be, especially in bad weather. The last thing you want to do is get lost and stumble into someone’s barrow, and so we think some stones might have been erected as way markers, as a familiar point in the landscape to meet at or to help get you home.

Over time, some stones gathered cup and ring marks, and people buried items around them. These stones might be crossing the gap between the sacred and the profane, a physical object people can relate to, but which represents far more than the sum of its parts.

I mentioned at the start that there is not a clear distinction between some standing stones and modern boundaries. Some continue to have a function today, having been re-used by people looking to make their mark. A great example is the Cammon Stone, which stands on the parish boundary between Bransdale and Farndale West. This was initially erected on the watershed by prehistoric inhabitants of the area, perhaps marking a territorial boundary or route. At some point in the post-medieval period letters were carved into it, proclaiming the land ownership to anyone who came past. Then in the 19th century someone wrote ‘Hallelujah’ on it, followed by the Ordnance Survey who inscribed a survey benchmark into the base! So over the years the Cammon Stone has served as a boundary symbol for different cultures, in multiple religious functions, and as part of the very modern practice of mapping.

Another stone which might represent different sacred uses is Low Cross, just north of Appleton-le-Moors. This curious piece of limestone, with a hole cut right through it, started life as a large prehistoric stone, but was transformed into a wayside cross by some enterprising mediaeval person. It probably served a very similar function in this role, reminding people of their religion and marking out a safe route. Since then it has fallen apart, a plaque seems to have come and gone, and it’s thought the hole might have been used to pay tolls, but it remains in place today as a lasting reminder of the people who once lived there. A 3D model of Low Cross today can be seen here – Low Cross standing stone by Nick Mason Archaeology on Sketchfab

All of this is why standing stones are so exciting to archaeologists – they stand in place today as physical emblems of the prehistoric, when so little else of those people remains. That’s why any examples which are in good condition are likely to be protected as Scheduled Monuments. All of those mentioned in the text here are Scheduled, and as solid as they may seem, sometimes they need some work to look after them. Unstable ground, visitor numbers, even cattle can cause a stone to become threatened. Work was recently carried out to reinstate one of the Newgate Foot stones which had fallen over. This project restored the collection of stones (which might be a small henge monument) closer to what they originally looked like. This is a more complex operation than it sounds, as the ground had to be carefully prepared and excavated to ensure that deposits which might give us valuable dating evidence were not being disturbed.

A similar operation was carried out on Wade’s Stone near Lythe, a monument with giant-related folklore ascribed to it.

If you’d like to see some archaeology and take in a breath of fresh air there are many popular walks around the North York Moors which pass close to prehistoric monuments as they run along the higher ground. As ever, you can always find out more about the fascinating past of the North York Moors using our interactive Historic Environment Record map, so why not find your closest monument and pay a visit. The Monuments for the Future project is always on the look-out for monuments at risk, so don’t hesitate to get in touch if you think a standing stone needs some attention. You can always volunteer with the National Park if you’d like to help with conserving our monuments.

3 thoughts on “Standing up for standing stones”