You might have seem our recent post on the beginning of our new Monuments for the Future project, caring for the Scheduled Monuments in the North York Moors. Over the nine previous years of the Historic England funded Monument Management Scheme we were able to reduce the ‘At  Risk’ status of 212 of our monuments. We are wanting to build on that success and move forward with Monuments for the Future which is being supported by another generous grant from Historic England.

Since July this year we’ve already had a fantastic response from our dedicated Historic Environment volunteers. With volunteers and staff working together, we’re confident that over the next few years we can monitor and maintain the 842 Scheduled Monuments that we have within our boundary, and continue to reduce their ‘At Risk’ statuses, or else remove them from the Heritage at Risk Register altogether.

From coastal industrial sites threatened by erosion and climate change, to grand prehistoric earthworks under attack by flora and fauna, there is a huge range of archaeology at risk. Our scheduled sites represent almost the whole of the human story in Britain, and the list is ever growing with a possible monastic grange site currently being considered for designation. We’re working to protect our historic assets and to tell everyone we can about our wonderful heritage.

Over the coming months, we’ll be posting themed blogs focusing on the types of monuments found in the North York Moors, the reasons they are considered nationally important, and why some are currently in trouble.

This month we thought we should start by introducing some of the National Park Authority’s Historic Environment staff and get them to explain themselves in their own words.

Mags Waughman, Head of Historic Environment
After nearly twelve years working for the Authority, first as Archaeological Conservation Officer and later as the Monument Management Scheme Officer, I was very pleased to become Head of Historic Environment at the beginning of the summer. This is an exciting time for the National Park’s Historic Environment work – with new funding to support our work with Scheduled Monuments, new archaeological staff and a new Building Conservation team we are in a very good position to develop our work and look for new directions and projects.

Emma and Jo focus on Monuments for the Future and Nick and I will be working with them on the project, as well as looking after the Park’s undesignated heritage. Suzanne Lilley works with Maria as a second Building Conservation Officer and one day a week they are joined by Clair Shields who has worked in the Building Conservation team for a number of years. Part of my role is to liaise with Maria, Suzanne and Clair to make sure the whole historic environment is cared for equally. I also liaise with the Land of Iron team where Maria has a second role as Cultural Heritage Officer, assisted by Kim Devereux-West. Behind the scenes, one day each week the team still has the benefit of the many years of experience of Graham Lee, a previous Senior Archaeological Conservation Officer. I’m really looking forward to working with the new teams, seeing our plans take shape and watching the different projects make new discoveries or have a positive effect on our fantastic cultural heritage.

Emma Trevarthen, Monuments for the Future Project Officer
I’m an archaeologist with a background in aerial survey and Historic Environment Record (HER) management. My role with the National Park is to look at the threats and vulnerabilities of some of the Scheduled Monuments which have been on the Heritage at Risk Register for some time, and to try to find ways to improve their condition and sustain those improvements in the long term. I’ve already had a really good, positive response from landowners and I look forward to seeing more monuments in the North York Moors removed from the ‘At Risk’ Register over the next three years.

Maria-Elena Calderon, Building Conservation and Land of Iron Cultural Heritage Officer
I have worked in in archaeology for almost ten years, specifically in Built Heritage since 2013 when I was awarded a training bursary by the Chartered Institute for Archaeologists hosted by ASWYAS in Leeds. My work has taken me as far afield as Qatar but the majority has been spent in the UK from Orkney to Pontypridd and Cambridge. I have worked for the National Park for nearly two years and I relish the opportunity it provides me to help protect, improve and impart knowledge of the historic environment to residents, tourists and fellow National Park staff. I work as a Building Conservation Officer which involves assessing Listed Building and Conservation Area consent applications. I am fairly new to this role but I enjoy it immensely and receive great support from my fellow officers. We work with homeowners, planners and developers to insure that any development is conducted in a manner that is sympathetic to the heritage assets. As an Authority we also offer grants for the above where the development will result in an enhancement which our team administers. In addition to that we regularly offer advice in regard to traditional buildings either subject to planning proposals or other project based work within the National Park. We also work with volunteers undertaking surveys of listed building as part of the nationwide ‘Buildings at Risk’ scheme.

Nick Mason, Archaeology Officer
I’ve only been with the National Park now for 3 months, but what a time it’s been so far. I have been lucky enough to be an archaeologist all my professional life, but having responsibility for the sheer breadth of archaeology in one place is a new, and very exciting, experience. My role as archaeology officer means that I am interested in protecting all the heritage assets of the North York Moors, including unscheduled archaeology, ancient plough marks, and even possible structures marked on old OS maps. Sometimes development means that these must be affected, and we find ways to mitigate the effect, learning as much as we can as we go. Scheduled Monuments often represent a massive potential for undiscovered archaeology, and their setting in the landscape, the possible finds within, and the stories they can tell mean it’s worth doing all we can to look after them for the future.

If you’d like to be out and about more in the North York Moors and might be interested in volunteering opportunities at the same time, we’d love to hear from you. There are a range of tasks which need doing, from carrying out surveys and reporting on monuments to clearing patches of damaging bracken on wild moorlands. 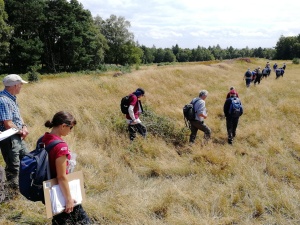 Similarly, if you think you know of some material heritage currently under threat please don’t hesitate to get in touch, so we can see what can be done.