Creating and expanding riparian woodland is a large component of the current WEG* funded project in the Esk Catchment, in conjunction with improving farm infrastructure. Riparian woodland is defined as trees located on the natural banks of waterbodies such as rivers, canels, ponds and lakes. The presence of riparian woodland brings an array of environmental benefits such as carbon capture, regulation of water temperature, bank stabilsation and provision of resources for wildlife. Riparian woodland is important feature of the Esk and provides benefits to conservation focus species in particular Freshwater pearl mussel (Margaritifera margaritifera), but also Atlantic salmon (Salmo salar) and Sea trout (Salmo trutta).This is why tree-planting efforts have been prioritized with project distribution located in both the upper and lower parts of the catchment.

Riparian woodland creation has focused on introducing a mix of tree species to the bankside to enhance structure and composition. Species which have a tolerance for wet conditions and partial submergence such as alder, aspen, birch and willow make a significant contribution to the mix. Other species such as alder-buckthorn, hazel, hawthorn and oak add additional variety. Planting design has incorporated adding open spaces such as rides and glades into the new small scale woodland as these are valuable habitats in their own right. All new woodland projects have an emphasis on long-term management to maintain habitat function with actions such as deadwood retention, grass-margin establishment, coppicing, pollarding and recycling tree-guards included in management plans. The vision is for these small scale woodlands to stabilize banksides, intercept agricultural run-off and reduce sedimentation entering into the Esk, leading to improvements in water-quality. Monitoring will record physical and biological change through measures fixed-point photography, vegetation monitoring and species recording. 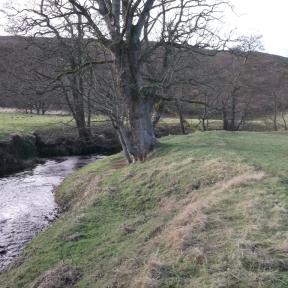 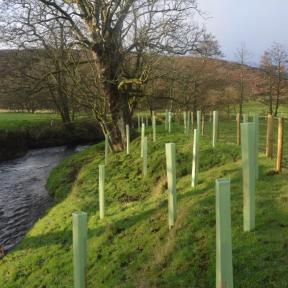 Despite the ongoing challenges of the Covid situation and fickle weather conditions, work has been progressing on the Esk catchment with 2,095 new trees planted with much assistance from land managers, staff and volunteers. Planting efforts will continue with the aim to have all 3,000 remaining trees in the ground by March. This will also be accompanied by the planting of 1,060m of new hedgerows, wetland creation and bank stabilization works. Along with the habitat creation and enhancement works, measures to improve farm infrastructure are continuing such as concrete yard renewal, installation of sediment traps and rainwater guttering. Combined these efforts seek to work at the farm-level and tackle pollution pathways from yard/field to river and lead to the improvement of water-quality of this special river. 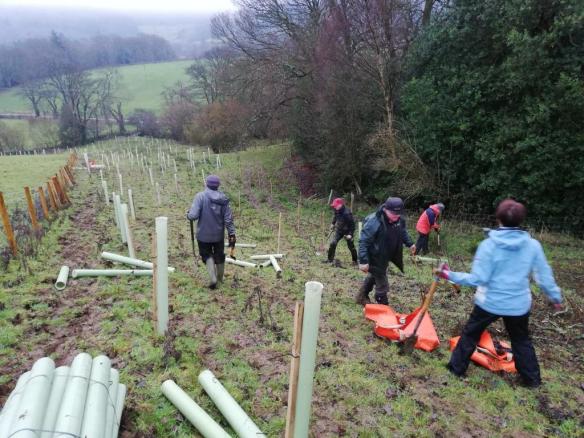 All work carried out has been in line with current COVID restrictions and guidelines at the time. To keep up to date with the latest National Park situation in regards Covid-19 – see here.

*WEG stands for Water Environment Grant which has been providing funding to improve the water environment in rural England. This has been part funded by the European Agricultural Fund for Rural Development.

It’s been a year since the River Esk and Coastal Streams Catchment Partnership was established and we have a lot to be pleased about!

The new initiative – the River Esk and Coastal Streams Catchment Partnership – has brought together the Yorkshire Esk Rivers Trust (YERT) and the North York Moors National Park Authority to pool knowledge and resources to improve and safeguard the catchment’s valuable ecosystems. Our Partnership has the support of DEFRA which, in 2013, rolled out the Catchment Based Approach idea across the UK promoting the need to work together to protect and improve our river catchments, with particular focus on sharing the knowledge, skills and expertise of local people.

I was appointed the Catchment Partnership Officer to help deliver our three year Action Plan which sets out a range of projects including river habitat improvements, fisheries monitoring and wider community engagement initiatives.

The main watercourse of Esk and Coastal Streams management catchment is the 28 mile River Esk which flows through some of the area’s most outstanding scenery. Its catchment is almost wholly within the North York Moors National Park – heather moorland, valleys of farmland, ancient woodlands and stone built villages – it reaches the North Sea at Whitby, just outside the National Park boundary. The river hosts a variety of wildlife which rely on it to survive including Freshwater pearl mussel, Water vole, Atlantic salmon, Sea trout/Brown trout (same species), Sand martin, Dippers, Kingfisher and Otters (which are found now in increasing numbers).

Over the last year we have secured funding to deliver particular projects in the Catchment – the People’s Postcode Lottery is funding the delivery of our Discovering the Esk project (look out for a future blog post) and the Environment Agency’s Catchment Partnership Action Fund is funding our Glaisdale Beck Restoration Project. Glaisdale Beck is a tributary of the River Esk and suffers from a number of issues affecting water quality, which inevitably in-turn affect the aquatic life found within the beck. Our restoration project is addressing these issues, such as:

Fine sediment – this causes huge problems for spawning fish including Atlantic salmon and sea trout, as a layer of fine sediment over spawning gravels (where fish eggs are deposited within the gravel) starves eggs or young fish (alevins) of oxygen. It also affects species such as the critically endangered freshwater pearl mussel.

Nutrients and organic matter, and bacterial loading – from dirty water run-off from farms and livestock having access to the watercourse.

Pollution incidents – we have established a team of local people to act as Riverfly Monitoring Volunteers to assess water quality on a monthly basis by monitoring aquatic invertebrates that are very sensitive to water quality. There are 30 sites being monitored across the catchment, including sites in Glaisdale, so if the number and diversity of aquatic invertebrates drop the Volunteers can alert YERT of any apparent pollution or other trigger incidents so the source can be tackled quickly and the effects limited.

Habitat deterioration both in-channel and along the riparian corridor – working with local farmers capital works will be undertaken over the next few months which will help to improve the water quality and riparian habitats of Glaisdale Beck:

As usual, teams of National Park Volunteers have already been hard at work in the catchment doing management tasks that make such a difference such as removing derelict fences, repairing existing fence lines and installing new ones. Over the next couple of months they will be carrying out other tasks such as tree planting too. As always, thanks to all of them for their hard work!

Simon Hirst – River Esk Project Officer The River Esk Volunteer Group was established at the start of the WREN funded “Esk Pearl Mussel Recovery” project and have been going ever since. The aim of the project is to improve … Continue reading →

Simon Hirst – River Esk Project Officer As mentioned previously the River Esk in the north of the National Park contains Freshwater pearl mussels (Margaritifera margaritifera). It’s the only river in Yorkshire with the species which is internationally important and classed … Continue reading →