After a very wet dig back in May 2017, Land of Iron volunteers and staff returned for a second season of excavation at Combs Wood, Beck Hole in July 2018 to investigate this important iron working and mining site. Luckily for us the weather held – we got to experience excavating in the hottest summer since 1976!

One of the major elements of the Land of Iron Landscape Partnership Scheme is investigating the ironstone industry from the early 19th century to the early 20th century in the North York Moors. Like many of the remains from the iron industry in the area since that time, Combs Wood has been reclaimed by the natural environment. With only 10 days to excavate we had a lot of questions to try and answer…

A Brief History of the site

Combs Wood is part of the Goathland Forest complex which belongs to the Forestry Commission. The site itself lies near the base of Goathland Incline and undoubtedly linked up with this railway line. The incline itself is so steep that in order to get the loaded coaches and wagons up to the top a gravity system was used – water butts were placed at the top of the incline and their weight was used to offset the weight of the wagons. Once the water butts were at the base of the incline they could be emptied and brought up to the top by horses. The horse-powered railway was converted into a steam hauled railway in 1845, and at some point the incline itself was transformed to steam power with a stationary engine at the top. The incline was eventually abandoned in 1865 (after an accident killed two and injured 13) in favour of a more level route, known commonly at the deviation line.

In 1857 that Whitby Iron Company was formed and began to construct the ironworks in Combs Wood. A series of drift mines were opened connected by elevated sets of tramways. The first iron was cast in 1860 and is commemorated by a cast-iron tablet in Whitby Museum. However the following iron working and mining operations were nothing short of disastrous until eventually in 1861 the owners offered the whole plant for sale. Receiving no bids the operation struggled on until a stormy night in 1864 when a landslide buried the two main access drifts, and demolished the beckside tramway and the water leat to the water wheel. No lives were lost but operations never resumed.

Nearby the small Beck Hole hamlet had changed exponentially with the opening of both the railway and the iron works. A row of 33 workers cottages were built corresponding with the workforce and their families. Birch Hall Inn was extended to include a provisions store. In 1860 the inn was licenced to sell ‘Ale, Porter, Cider and Perry’, vital for any workforce. The population boom ended in 1864 with the mines closed and the furnaces dismantled, the cottages were demolished and the only reminder in Beck Hole of a once lively iron industry was the expanded Inn. The ironworks site and associated cottages and infrastructure began to slowly recede under the encroaching vegetation… 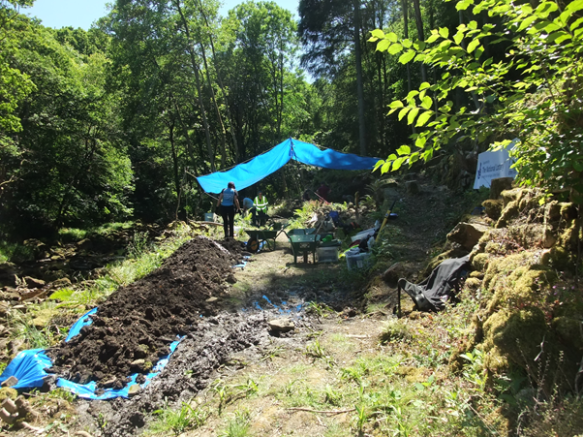 Entering the site, we passed the remains of the bridge that once connected the ironworks to the other side of the Murk Esk river and the Whitby to Pickering railway line. At first, the lower part of the site appears to be fairly straight forward. To the right, there is a stone building potentially an office for a manager or clerk. It has two floors with evidence to suggest that the walls may have even been plastered. To the left, there is a wheel pit for a wheel powered by the river that runs perpendicular. We cleaned and recorded the office building as most of the necessary excavation here had already been completed during the previous season.

The wheel pit was another story and there was nothing simple about excavating this feature. which involved navigating the metal poles (cross acro clamps) used to shore up the pit walls, and the daily water removal from the pit bottom. The aim of excavating the wheel pit was to reveal and record the floor of the structure and to gain a greater understanding of its purpose and extent. However, as the excavation progressed, more and more questions about this feature emerged. While we now have a good idea of how the timber water wheel would have worked; we have less idea about what it actually powered. An investigation into a structure on the next level of the site was made to try and see how the wheel pit may have related to other structures on site, including a channel which ran from one level to the next.

Continuing along the tramway we made our way further up into the woods to the upper part of the site which holds arguably more mysteries to uncover. A row of collapsed buildings emerge from the grass to the left and ahead an unidentified structure which was almost completely hidden by vegetation. The first building we chose to explore is the middle of the three larger buildings. It revealed a red earth floor with slag (a waste product of iron working) scattered throughout. The main feature of the room is the ‘forge’ which is still in surprisingly good condition. Theories behind the purpose of this feature on the site are various, ranging from testing the quality of the iron ore coming out of the mines, to creating the horse shoes for the mine horses. To the left of the forge, we discovered an incredibly intact stable floor. The floor shows a drain running along the length of the stable with drilled post holes used to create the wooden stalls for the individual horses.

On the first Saturday of each month the National Park Authority run the Moors and Valleys Young Archaeologist Club (YAC) for young people aged 8 to 16 years. For the July session, the club joined us on site at Combs Wood to experience a working archaeological excavation. The children were treated to an in-depth tour of the site and also got to sieve through the spoil heap to find any artefacts that the volunteers and staff had missed. The club did very well, discovering tile, pottery and even a nail.

The amount that we achieved in just 10 days is astounding and a credit to the work ethic of our volunteers. Not only did they shift tonnes of soil and stone they assisted with the public tours, and provided knowledge and insights which helped establish a greater understanding of the site. Without them the excavation would just not have been possible.

Thanks also to the Forestry Commission for permission to keep excavating.