A few years ago I was walking in Broxa Forest when I became aware of a strange low bubbling, turring sound. For a minute I just couldn’t place it – perhaps a frog? Then it clicked – I hadn’t heard it for years but it had once been so familiar to me. I went home and looked up some facts and figures and was horrified (though not entirely surprised) to learn of the drastic fall in numbers of a bird that was once so well known (and still is widely known by name if only through the 12 Days of Christmas). So when I heard about the Turtle Dove Project I was immediately keen to get involved. OK, so getting up at 3am to be in the forest ready to start a survey at dawn is somewhat daunting, and I even felt a bit nervous at the thought of walking through the forest in semi-darkness. But once up it is a truly magical time to be out there. I’ve had close encounters with badgers, deer, hares and much other wildlife.

On my very first survey I was nearing the end, almost resigned to a negative result, when I approached a clearing and before I could see through the trees I heard that unique sound. It turned out to be 3 singing males. I really had to stop myself shrieking with delight! Since then I’ve had less luck, but the memory of that moment has helped to maintain my feeling of anticipation. It has also been really encouraging to know that the data from that first survey has already been used to target conservation measures on local farms. Perhaps in a few more years encounters with these iconic birds will become more common. 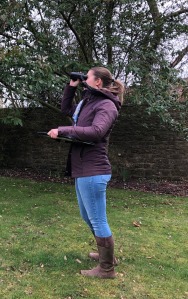 Our North Yorkshire Turtle Dove Project surveys start again in May. We will be holding two meetings this spring to explain the surveys and to allow volunteers to meet up. One meeting will be in the Dalby Forest Courtyard Building (YO18 7LT) on 24 April at 7 pm and the second at the Yorkshire Arboretum (YO60 7BY) in the Howardian Hills on 2 May, again at 7 pm. If you’d like to get involved please come along or alternatively email Richard Baines, Turtle Dove Project Officer.

We thought we’d try something new, new for us anyway. Now and again we’re going to post bits and pieces on conservation. the National Park and the North York Moors – under each letter of the alphabet. That’s the plan – we’ll see how far we get.

The North York Moors includes large areas of forest owned and/or managed by the Forestry Commission. These forests were planted at the beginning of the 20th century when in a time of uncertainty following World War One it was decided that the nation needed to create and maintain its own timber resource. This afforestation had a dramatic long term effect on the landscape of the North York Moors which continues today. Timber and other wood products from both public and private enterprises in the National Park remain economically important to the North York Moors. 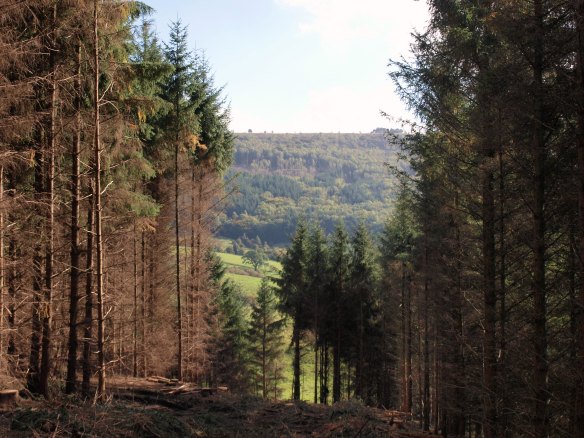 This is using the word afforestation as it is understood nowadays – turning land into forest by planting trees. In medieval times afforestation meant designating land as forest and therefore placing it under forest law, separate from common law. A forest meant an area for hunting belonging to the Crown; so heathland and grassland as well as woodland, wherever deer and boar and other game animals would live.

This bat was first identified as being in the United Kingdom in 2010 – in Sussex and in the North York Moors. It could have been here for years it’s just that it’s difficult to distinguish from other bat species. The Alcathoe bat lives in woodland and swarms with other bats to mate before hibernation. One of the records in the North York Moors was from the autumn swarming at one of the Ryedale Windy Pits. 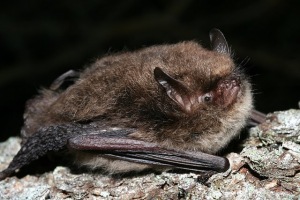 Alum was one of England’s earliest chemical industries, operating in the North East Yorkshire region from c.1604 until 1871. Alum (aluminium sulphate) was important in textile production which was our main export in the 17th century, and was used as a compound with potassium (e.g. seaweed) and ammonia (e.g. urine – at first collected locally and later also shipped in from coastal towns) to make vegetable dyes colour-fast. With the exception of one Alum Works in Lancashire, North East Yorkshire produced the entire supply of English alum until the early years of the 19th century. The main Alum Works and Quarries were along the coast, which provided better exposures of the mineral together with the most practical means of transport to markets when travelling by sea was a much better prospect then setting off across country. Although softened by over a century of weathering and coastal erosion, the extracting and processing industry has left huge imprints on the North York Moors landscapes which can still be seen today for example at Ravenscar, Saltwick, and Kettleness.

Grows on hedge banks and on woodland edges in the leaf enriched soil. Common throughout Britain and Ireland.

Looks like something from science fiction and has a life cycle to suit.

Has large shiny green leaves sometimes with dark blotches, followed by a thin leaf like cowl growing up through the centre and partially opening to reveal a smelly purple-ish central spike (March/April). This smelly heat emitting spike attracts insects which then slip down into the plant and are temporarily trapped in the base where they pollinate the tiny hidden flowers (female) and collect pollen from the male flowers to carry elsewhere once released. The leaves and initial spike wither away and are replaced by another spike growing upwards topped with the female flowers as small berries which turn from green to red (July/August). Birds eat the berries – but they’re unpalatable and poisonous to humans, as is most of the plant. 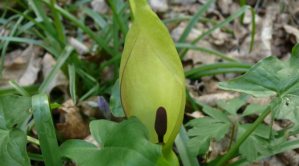 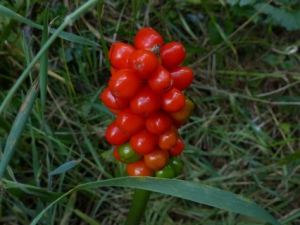 The Esk is the principal Atlantic salmon river in Yorkshire. The whole of the River Esk catchment is within the North York Moor National Park.

The rod catch on the Esk in 1923 was 950 fish per year, this number has declined to about 170 fish in 2010. The National Park Authority’s Esk Pearl Mussel and Salmon Recovery Project has been running since 2007 and its aims include reversing the decline in the Atlantic salmon population in the river by improving water quality, improving in-river and riparian habitats and removing barriers to vital fish migration. 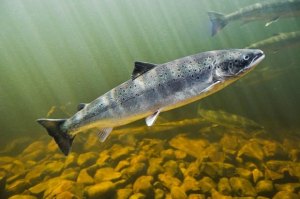 i.e. the right attitude to work positively with people in the National Park to listen to what others have to say; to try and tackle concerns; and to take forward National Park purposes together.

The latest example of this attitude in action has been the Dales and Moors Farm Innovation Pilot Project where the North York Moors National Park worked with the Yorkshire Dales National Park and neighbouring Areas of Outstanding Beauty across the wider area and used skills funding through the local LEP to provide free business and environmental advice to guide local farmers into producing their own whole farm plans and tailored proposals for sustainable ways forward for their farms.

Austropotamobius pallipes are native White-clawed crayfish. The upper tributaries of the
Yorkshire River Derwent in the National Park still support populations of this nationally declining species. What with needing clean aquatic habitats, competing with non-native aggressive signal crayfish, and suffering from deadly crayfish plague, the White-clawed crayfish are in a perilous situation. Just when you thought their luck couldn’t get any worse, one of these Yorkshire Derwent tributaries, the River Rye, tends to dry out in the summer at one particular location because of sink holes, leaving the local population of White-clawed crayfish and other aquatic creatures stranded.

So just like a year ago, last week we had to launch another rescue mission. Alex led a team of Emily, Simon (who has a licence to trap and/or remove crayfish), Helen the Planning Officer, Alex’s partner Toby, and a helpful man called Jim and his dog. They managed to collect and relocate upstream of the sink holes around 500 White-clawed crayfish (including females carrying hatchlings) as well as 20+ lamprey and 40+ small fish that were scooped up with them. 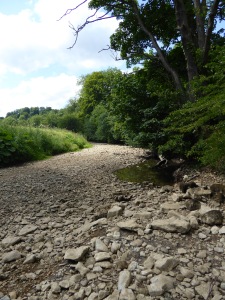 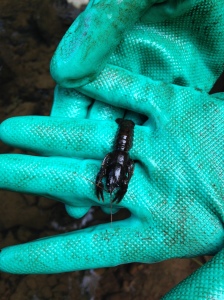 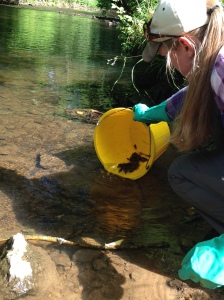 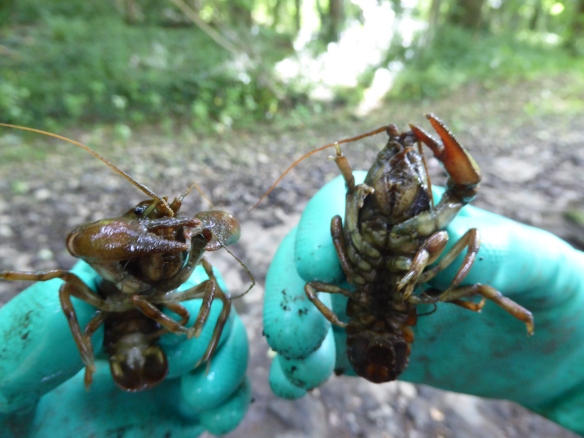 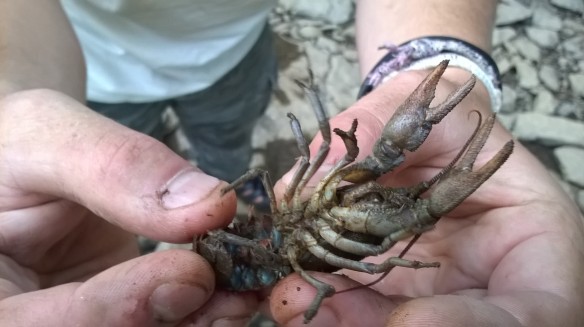 A couple of weeks before the Environment Agency (EA) had carried out a fish rescue at the same location. The EA rescued and re-located 265 Brown Trout, 65 Grayling, 5 Lamprey and 100s of minor fish species including minnows, stone loach and bullheads. They also rescued 50 White-clawed crayfish, some carrying eggs.