We like Top 10 lists on this Blog – here’s a Top 5 instead. Our Building Conservation team pick their Top 5 projects from the last financial year.

These Top 5 building conservation projects are some of our favourites and have been selected to give a snap-shot of some the work the National Park Authority has been involved in. Not all these projects involved direct grant funding but they all included our input in one way or another. The projects aren’t in any particular order and are featured for a variety of reasons such as size and scale, uniqueness, quirkiness, or because the works have been a labour of love carried out by the owner! 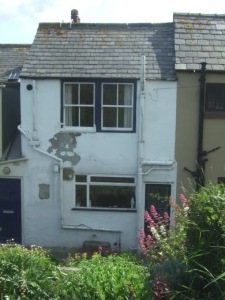 The replacement of modern unsympathetic windows and reinstatement of old style vastly improves the appearance of a property. This can be a simple task to undertake when there are old photographs for reference, or the size and shape of the opening clearly indicates its former style. However in this case, it is obvious that the existing downstairs window was a relatively modern intervention and therefore in order to find a suitable style and arrangement to compliment rather than detract from the host property lots of sketches were drawn up to compare and consider. This resulting unequal sash adds to the diversity of the area’s architectural features. 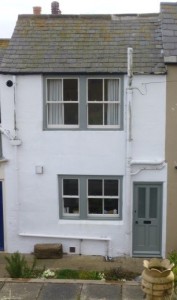 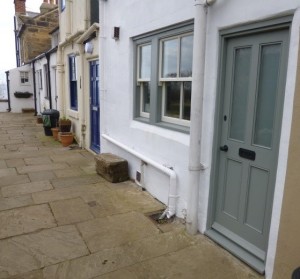 Last year there were several projects in Staithes which saw the reinstatement of more traditional style windows to properties located in the heart of this important Conservation Area.

This is Chapel Cottage – where modern windows were replaced with traditional vertical sliding sash windows and Yorkshire sliding sashes to the dormer. 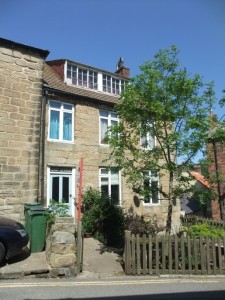 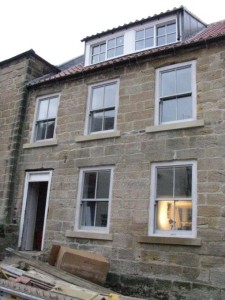 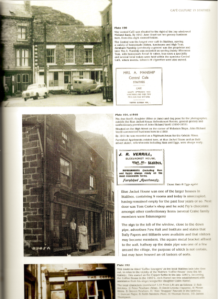 Here, old photographs were used to evidence an older style of window. Consideration was given to the possibility of removing the render to the front, however the old photos shows that this was a former shop and therefore the stonework underneath was unlikely to be of good enough quality to expose. The two tone paint colour, (a typical feature of coastal villages) enhances the local distinctiveness. 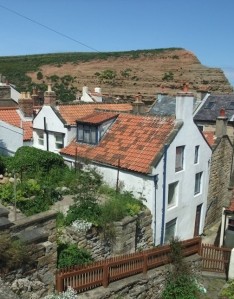 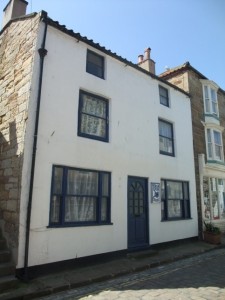 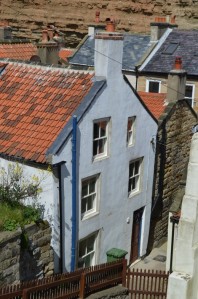 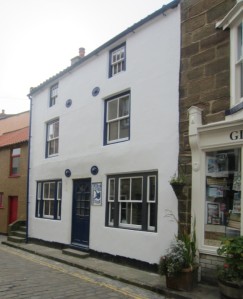 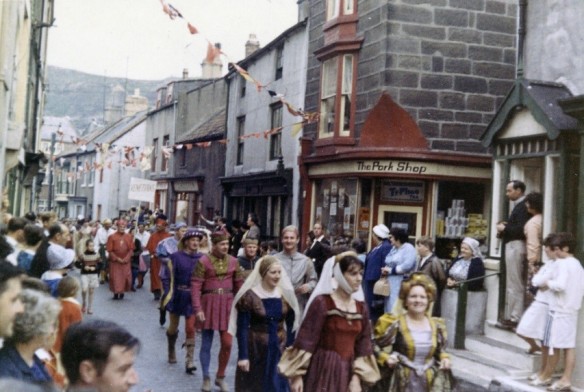 Waymarker stones may seem relatively insignificant as listed structures compared with castles and cathedrals, but they were culturally important. Historically they were guide features for people traversing the moorland, defining the route to follow in a landscape which has very few points of reference. For this reason, waymarkers are still found across the moors. However where modern roads follow the same historic routes often waymarkers have been lost through damage or theft, which was the case along the Pickering to Goathland road. Of the seven recorded listed waymarkers, only one was still in place.

In order to maintain the evidence of this historic route, we worked with the Estate to reinstate six of the lost waymarkers. A local farmer was particularly keen to see them reinstated as in winter when the snow covers the moors they still define the line of the road which is as useful now as it was in the past. 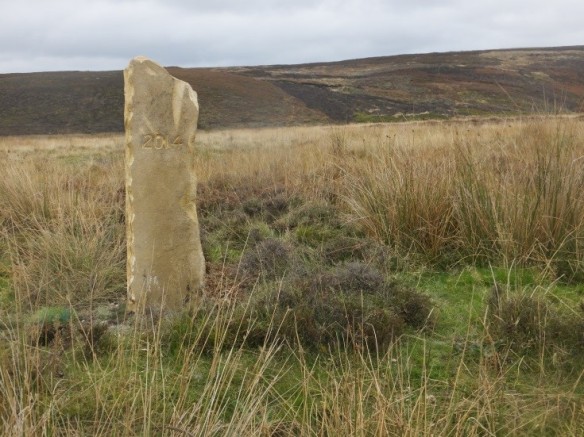 In contrast to waymarkers and windows, due to the sheer scale of the work involved the Ionic Temple project was a milestone for the National Park Authority. The Temple had been on English Heritage’s ‘At Risk’ register since its inception in 1985. The repair of the Temple was a big project to be involved in, alongside many other funding bodies. See our previous blog post for more details.

The companion Tuscan Temple, at the other end of the Rievaulx Terrace, is due to be repaired through Natural England’s Higher Level Stewardship Scheme.

I’ve taken over the role of Conservation Project Assistant from Kirsty who left the National Park Authority earlier this year for pastures new. 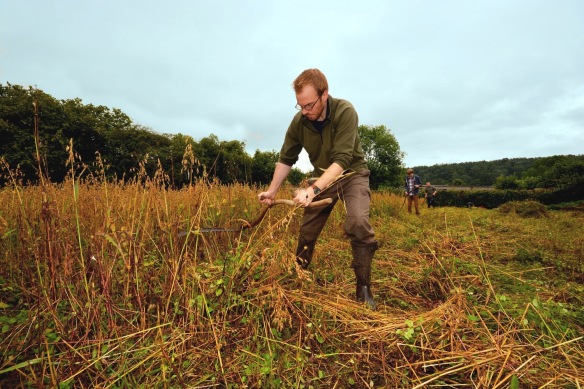 I have had a fairly diverse career so far. I am a qualified primary teacher, have worked in business and manufacturing, and have spent more time studying than I care to think about! I have always had a passion for the natural environment, and volunteered whenever and wherever I could. A recent move to North Yorkshire enabled me to retrain in this sector, and now I find myself working for the National Park Authority, which is a dream come true. I love being able to meet the people who manage the land in the National Park, helping them to conserve and enhance the North York Moors in a way that is beneficial to both people and the environment. So far I’ve been largely concentrating on turning Traditional Boundary Scheme (TBS) applications into agreements to help restore boundaries that are so important to the landscape character of the North York Moors.

Amidst my TBS efforts, a couple of weeks ago John (Land Management Adviser) and I attended the annual Farm Liaison Officers conference hosted by the South Downs National Park. This event is an opportunity for agri-environment staff from all 15 of the UK’s National Parks to meet and discuss common issues and difficulties that we face, as well as to find areas of best practice which we can take back to our own National Parks. Whilst the job titles differ from Park to Park it was clear that what we all shared was a passion for working with land managers to achieve mutually beneficial conservation goals.

The first full day was filled with site visits – even if the specific habitats and species we saw were sometimes different to those in the North York Moors, the issues around land management and competing pressures are similar to those we face here. 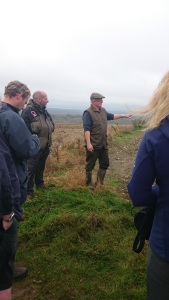 The first day started with a visit to Bignor Farm near Pulborough. Here, Tom Tupper, a local landowner, introduced us to the chalk grasslands, known as downlands, that make up much of the iconic character of the South Downs. During World War II the South Downs lost about 80% of its grassy downlands, partly to intensive agriculture for food production, and partly to military training. Today, only about 4% of the South Downs remain as chalk downland.

Tom also took us to Bignor Roman Villa, which has been in his family’s stewardship since it was re-discovered over 200 years ago. The site is renowned for having some of the best Roman mosaics in the country, both in terms of detail and preservation. Our stop at the villa allowed us to discuss the intricacies of preserving monuments alongside the public (and often financial) requirement for interpretation and access. There are similar issues at Cawthorn Camps, a Roman site on the North York Moors. 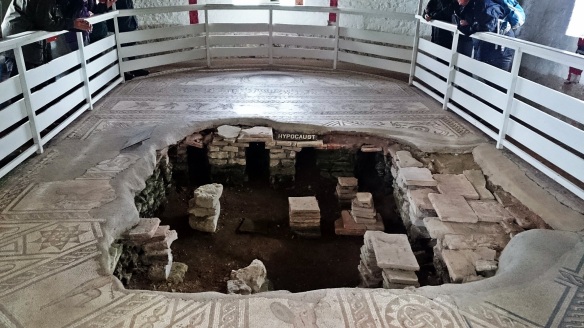 We visited Peppering Farm on the Norfolk Estate. The Estate is currently in a Higher Level Stewardship agri-environment agreement, but carries out more conservation work than it receives money towards, for instance in regards to reversing the decline of the Grey Partridge. This highlighted the ongoing issues that arise from trying to balance landscape enhancement with the need for productive practical agriculture. We also saw a restored dew pond. Dew ponds have been dated as far back as Neolithic times, and are a source of much debate as to how they traditionally filled up with water. Landscape archaeology suggests they were used for watering cattle and were lined with clay to hold the water. As we saw, they are always a popular haven for wildlife. There are number of such ponds in and around the North York Moors. 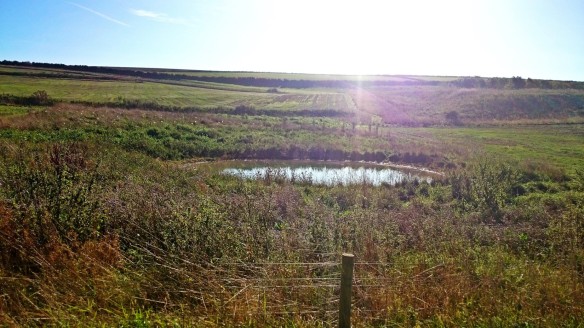 We also visited Pepperscombe on the Wiston Estate. Here we were introduced to the Steyning Downland Scheme which aims to reconnect people, particularly children, with the countryside around them. The Scheme partly came about because of increased visitor pressure on the South Downs Way, which runs through many farms and fields, as well as mountain biking and dog walking issues. Today there are Trustees and a steering group to represent the needs of the local community, which has seen a designated area created for bikers, the establishment of a team of local volunteers to monitor the plant life, and the opportunity for school children to enjoy creative educational days out on site.

Cattle are used to graze the scrub. The photo below shows the effect just a small number 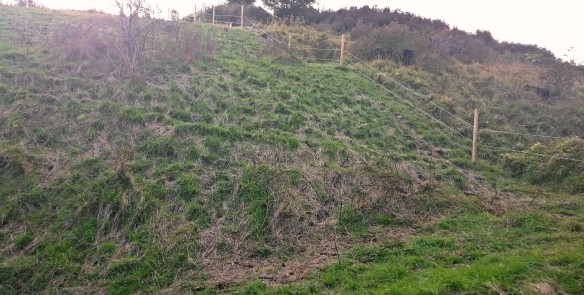 of cattle can have. The area on the left in the foreground was grazed by just six Dexter cattle for only 3 weeks. The area on the right in the background is a new area of scrub the cattle have just moved in to. The difference is remarkable. Dexter cattle are the smallest of all European cattle breeds, and can be particularly suited to conservation grazing with public access because the animals are less intimidating to members of public than larger breeds. 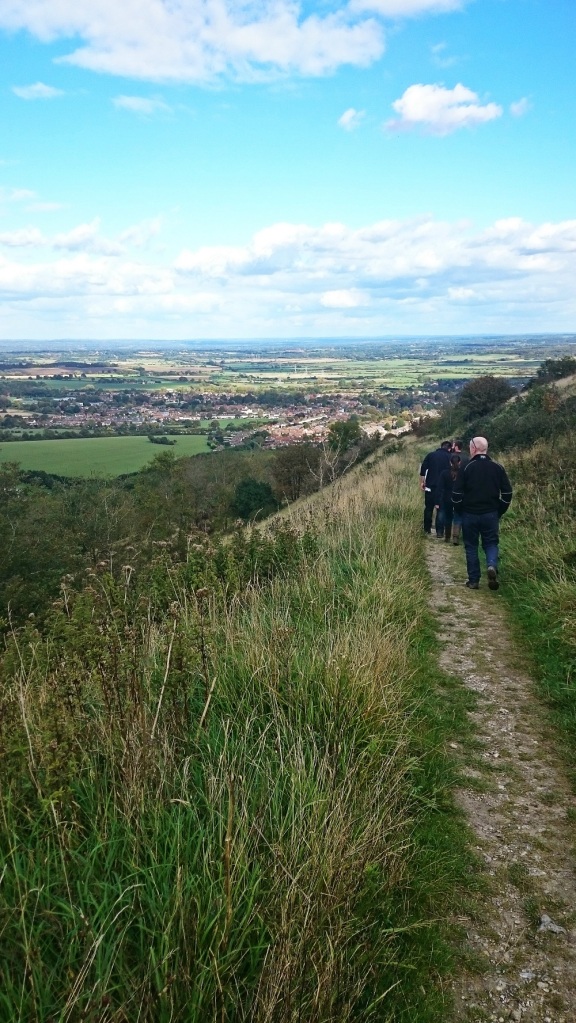 On the second day, we were back in doors talking through shared subjects such as funding opportunities under Rural Development Programmes and transition from the current national agri-environment schemes (Environmental Stewardship) to the new Countryside Stewardship scheme. Overall the conference proved to be very informative, and I think we all took away knowledge that will help us with our work with land managers to enhance the qualities of each of our wonderful National Parks.

I wish that my favourite view in the National Park was tucked away somewhere that nobody else knew about – but it isn’t.  Instead it’s one of our most photographed views – the Hole of Horcum within Levisham Estate. Not only is the view stunning but it has also proved to be a key location for landscape works towards the Slowing the Flow in Pickering project. 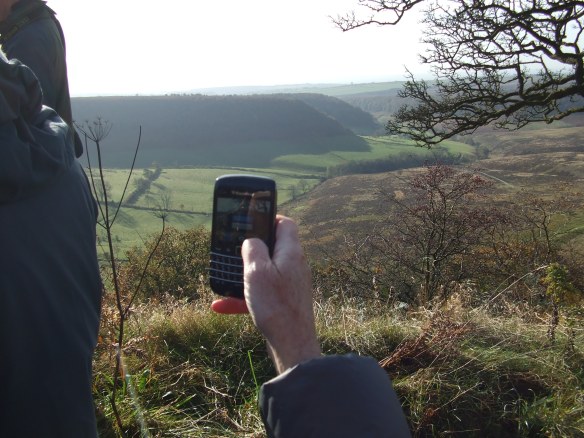 Work began on 8 January 2014 on the bund at Newbridge which will store flood waters upstream of Pickering. This work is a culmination of efforts by a number of partner organisations over the last few years to make changes to upstream land management to slow down the water running off the North York Moors and into Pickering Beck before it gets into Pickering town.  For the last three years the National Park Authority has been busy carrying out the following work on its own land at Levisham Estate. 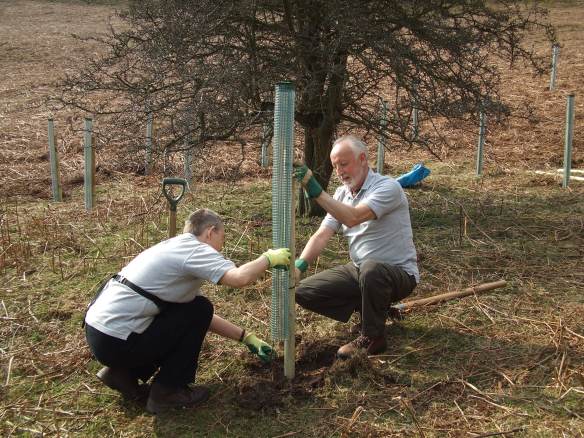 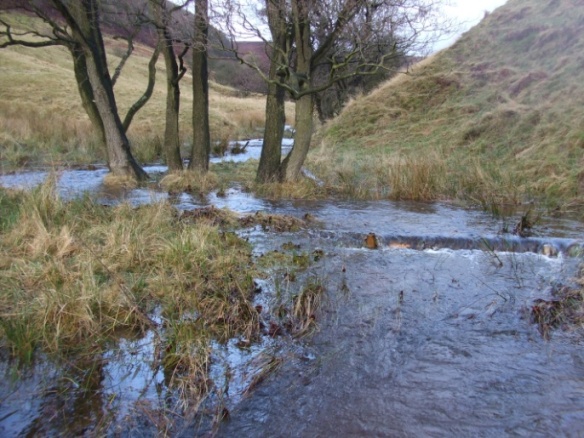 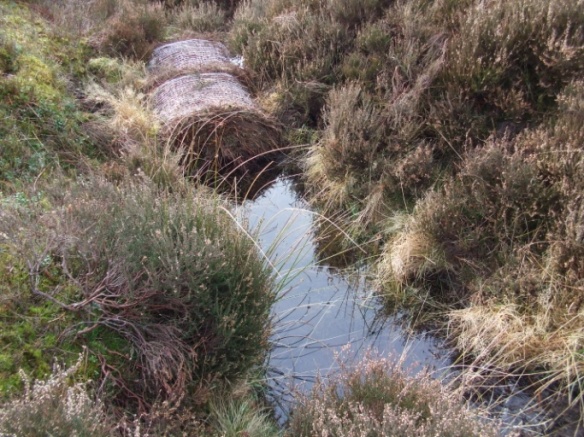 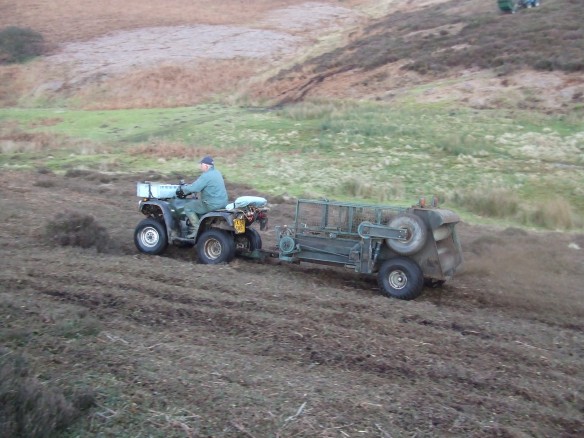 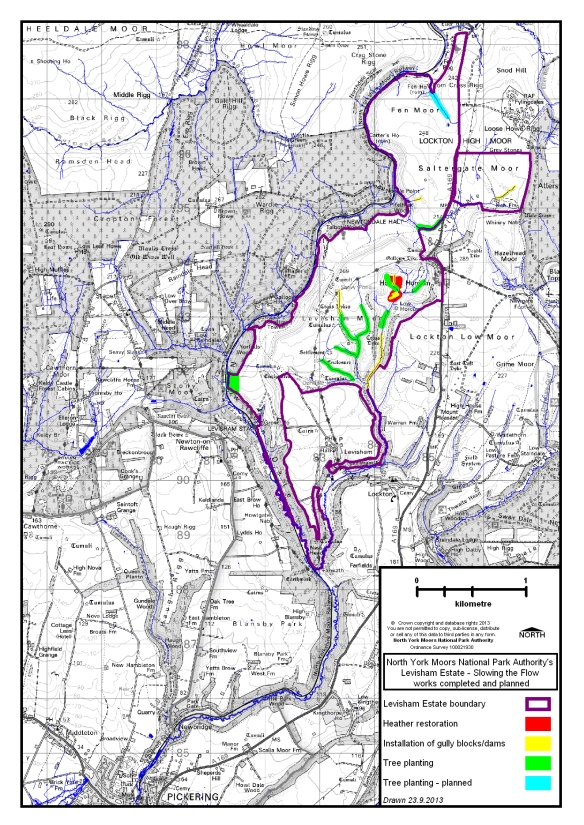 The hope is that with this type of beneficial land management established upstream of Pickering, along with the creation of the bund just to the north of the town, the chance of extreme flooding events will be lessened in the future.

The North York Moors may not be well known for its arable land, but we have much more of this than most National Parks and it can be a very valuable wildlife habitat.  Several of the recent starters in the Conservation Department were recently shown some of the potential value of arable land to encourage rare arable plants. They visited a farm at Potter Brompton, a bit outside the National Park boundary but one of the key farms in the Cornfield Flowers Project. This farm is in a national agri environment scheme – Higher Level Scheme (HLS) – and we saw several spectacular examples of where arable flower populations are burgeoning with the help of a variety of HLS options. Not everything was going precisely according to plan, of course, and there were interesting discussions on how to accommodate the scheme’s requirements with sometimes fickle wildlife! 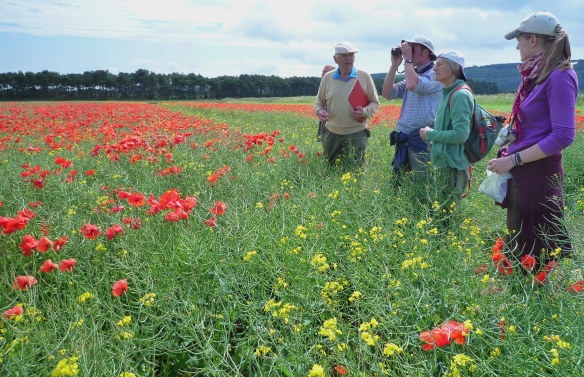 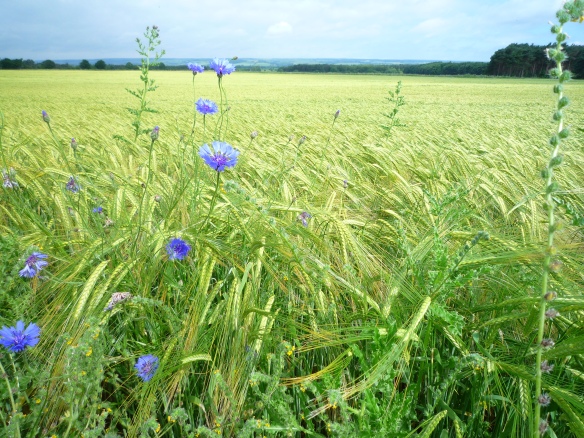 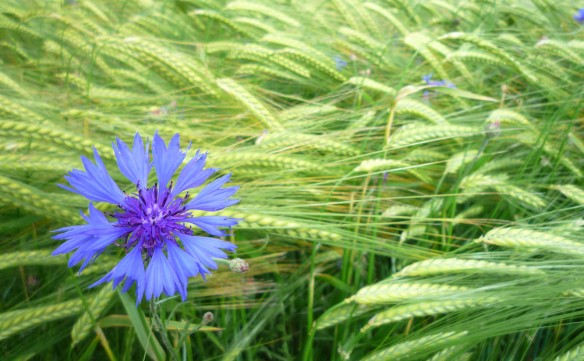 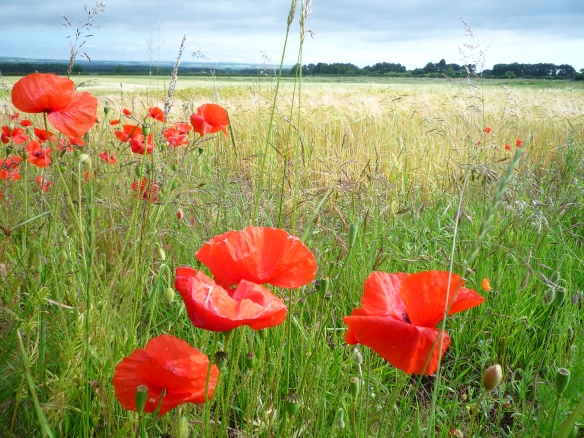