I am pleased to be working for the next three years with the School of Earth and the Environment at the University of Leeds as a Post Graduate Researcher funded by the North York Moors National Park Authority through their planning agreement with Sirius Minerals. The agreement provides funding for a range of initiatives and projects to help offset the impacts of the Woodsmith Mine development on the National Park, including its exceptional coastal geology. Construction of the mine provides an opportunity to access new geological materials and through my research project I intend to study changes in ocean chemistry across the Early Jurassic period which have been preserved in these and in the rocks of the North York Moors coastal area. 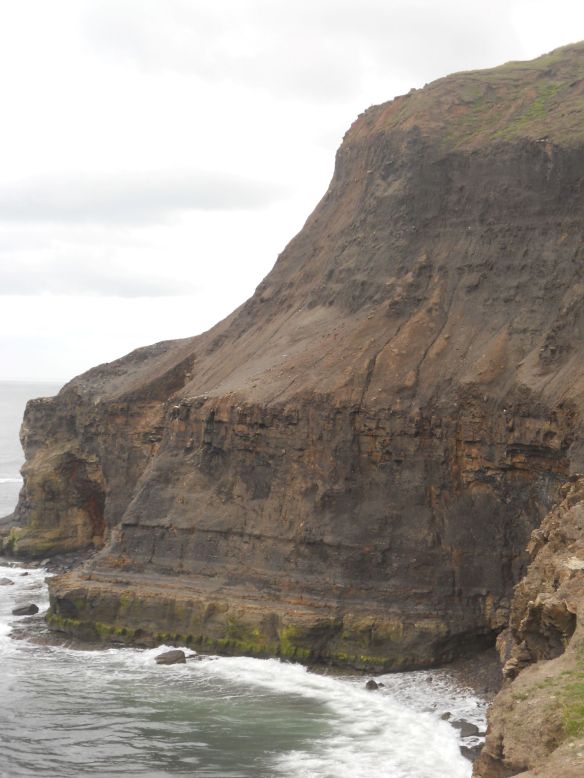 The cliffs of the North York Moors coast at Kettleness, showing the very top of the Cleveland Ironstone Formation (deposited around 183 million years ago) with the Grey Shales, Mulgrave Shales and Alum Shales overlying it.

The early Jurassic was a turbulent period in the Earth’s history. At the start of the period the supercontinent Pangea was just beginning to split up to form two continents, Gondwana in the South and Laurasia to the North, with a shallow ocean between them. The climate was also changing with the arid Triassic giving way to the warmer, wetter Jurassic. The changes over this timeframe put stress on the animals and plants of the period, causing several extinction events.

The Toarcian (the last geological period of the early Jurassic), which contains one such extinction event, is the first section of the early Jurassic I plan to study. This event (called the Early Toarcian Mass Extinction) was a second order extinction, meaning it wasn’t one of ‘The Big 5 Extinctions’ of the last 500 million years, but it was still a significant crisis for biodiversity at the time. During this event it is estimated 26% of genera died out, particularly affecting marine groups such as bivalves, gastropods and brachiopods living on the seafloor and squid-like belemnites and ammonites in the water column. 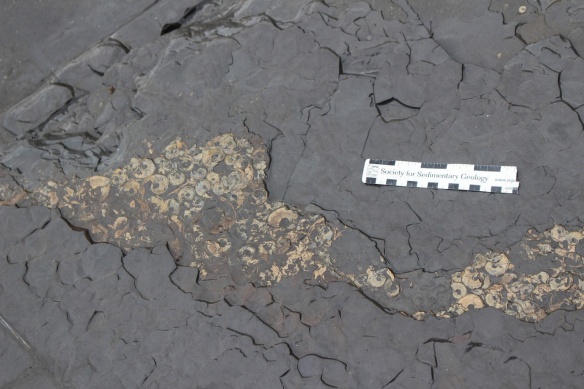 Pavement of fossilised ammonite (Tiltoniceras) from the top of the Grey Shales.

Researchers now think that this extinction event was caused by increasing volcanic activity in the southern hemisphere during the early Toarcian, which triggered an increase in greenhouse gases, such as methane and carbon dioxide. This increase in greenhouse gas concentration warmed the climate, possibly causing further release of greenhouse gases from methane in the shallow oceans and permafrost. This feedback cycle would have further raised the global temperature and affected the hydrological cycle, creating a hotter, wetter environment in the early Toarcian time period

More rainfall increased the amount of sediment washed into the ocean from the continents, potentially flooding the ocean with high concentrations of nutrients such as nitrates and phosphate. This high level of nutrients may have caused a spike in primary producers in the sea, such as algae. When these organisms died, they were likely broken down by microorganisms which removed a lot of oxygen from the water, causing a shortage of oxygen, known as dysoxia. This dysoxia and the increasing global temperatures are believed to be the key drivers behind the Early Toarcian Mass Extinction.

Understanding the changes in the ocean nutrient cycling is thus vital to understanding the impact on the organisms living there. Phosphate is a particularly interesting nutrient to study as phosphorus is an essential element in all organisms; on a geological timescale phosphate has even been shown to be the limiting nutrient required for the formation of life.

The initial phase of my PhD project looks at identifying changes in dissolved phosphorus in the ocean over the Toarcian time period. To do this I will examine changes in the phosphorus content of belemnite fossils. Belemnites are extinct squid-like cephalopods. Belemnites are the ideal candidates for this work as they lived in the water column, rather than at the ocean floor, and they are common and often well-preserved. Some pilot work appears to show an increase in phosphorus concentration of belemnites over the Toarcian anoxic event, though this is rough data with large associated uncertainties. Currently it’s unclear if there is a real change in belemnite phosphorus content, and if it represents changes in water column phosphorous concentration. 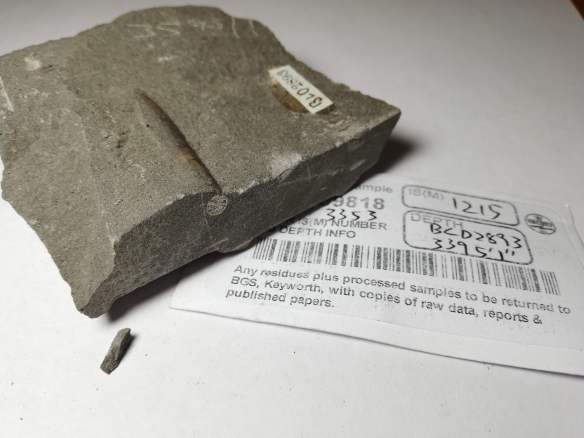 Fossilised belemnite in sediment, taken from a sediment core from Mochras, North Wales.

Some work has already been done to study phosphate concentration on the ocean floor over the Toarcian period by analysing sediment. Though my work is attempting to identify changes in phosphorous in the water column, I intend to complete this sediment analysis for sediment surrounding the belemnites as well. This analysis could help determine if the phosphorus in the belemnite originated from the water column during the belemnites life, or if it originated in the sediment after its death.

I am excited to see what my analyses will show, and I hope my research will contribute to the understanding of the process behind some mass extinctions. If my technique is successful, I could spend the remainder of my project applying it to other sites around the world or to other extinction events.