Further to my last blog post, here are some more examples of enthralling LiDAR imagery from the North York Moors. As mentioned previously, the interpretation of features is not necessarily straight-forward since we are not seeing a photograph per se  but a series of points joined together by a computer algorithm. A clear resemblance to ‘known’ features is a good start but often there is no substitute for checking the site on the ground where necessary, with the landowner’s permission. 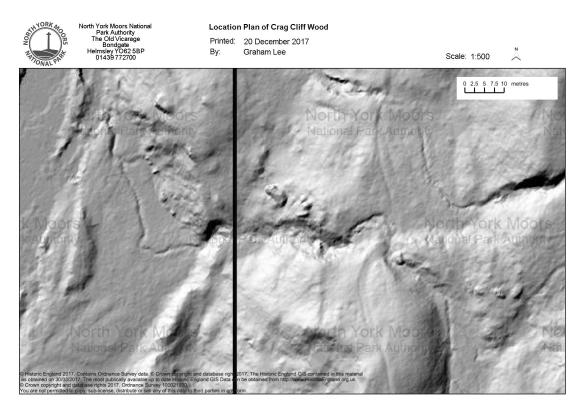 This image is from the 2016 This Exploited Land 25cm LiDAR (equating to c.16 data points per square metre). The This Exploited Land of Iron Landscape Parntership Scheme focuses on the 19th century ironstone industry in the North York Moors, one of the major sites for this was around Grosmont. This little four-fingered ‘hand’ near the centre of the image, just c.6.5m wide, is clearly a group of linear spoil tips leading out from a small excavation, perhaps a mining trial in the valley side? The linear runs of spoil, as tipped out of a barrow, are a very typical form associated with mining or quarrying sites. On steeper slopes, these are often tear-drop shaped.

Figures 2 and 2a: Rievaulx Village and the River Rye 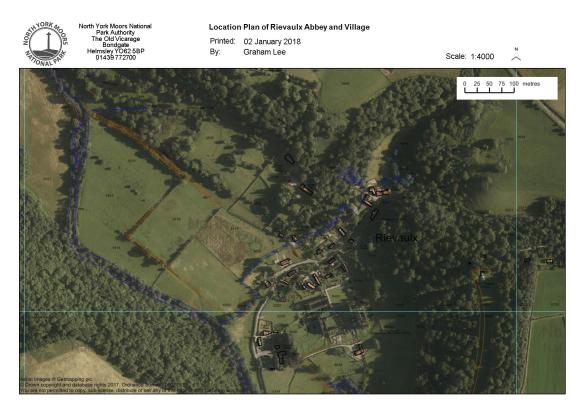 This image from the Environment Agency 50cm LiDAR (equating to c.9 data points per square metre) shows the site of Rievaulx Abbey (Scheduled Monument) near the central bottom of the picture, with all the buildings stripped away to show the underlying and surrounding earthworks. There is a mass of detail to see here. To the north of the Abbey are the houses of the village with a whole series of platforms and enclosures visible on the valley side. Just below these is the line of the “Canal”, a watercourse dug by the monks to bring a supply of water from the River Rye into the Abbey complex. Surrounding the village are numerous hollow-ways (former routeways) and extensive remains of old quarries. The level earthwork platform, running North-South to the bottom right of the picture is the northern half of Rievaulx Terrace. The corresponding aerial photograph from July 2014, with the water courses and major earthworks (mapped by the Ordnance Survey) layers switched on, help to clarify the positions of some of these features, including the line of ponds leading down to what was the Medieval water-mill, now a private dwelling.

Figures 3 and 3a: Holmes Alum Quarry in Mulgrave Woods

This is a classic example of the value of LiDAR imagery. The aerial photograph from August 2015 shows trees blanketing virtually all archaeological detail but this is beautifully clear in the 10cm resolution LiDAR image from Spring 2017 (Durham University/North York Moors National Park Authority; equating to c.90 data points per square metre). You can see the three adjoining quarry scoops to the south of Sandsend Beck, with a mass of, presumably associated, earthworks just across the beck to the north-west. This is thought to represent the site of Holmes Alum Quarry which is recorded as operating from about 1680. Works here had ceased by the late 18th century / early 19th century when this area was landscaped as an arboretum for Mulgrave Castle. I am not aware that this site has ever been surveyed in detail on the ground – this imagery provides a very good starting point. Roasted shale is recorded as having been found in the area so the sites of roasting clamps and, possibly, even steeping pits should probably be there to be found. On the plateau to the south of the quarries is an area of Medieval and Post-Medieval Ridge and Furrow (ploughing) cultivation which is clearly visible.

For more information on LiDAR, have a look at “The Light Fantastic” produced by Historic England

Whether by accident or design these were our top 5 posts in 2016, according to the number of views.

1.The aesthetics of trees

If you’re a land manager and you’re interested in grant to help you create, manage or improve your own woodland masterpiece – here’s a link to the national funding that’s available. Watch out for the set application windows because they’re often quite short. 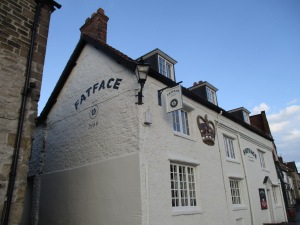 As part of the renovation of The Crown Hotel in Helmsley the building was subject to a re-assessment of the development of its historic fabric by Colin Briden, an Historic Buildings Archaeologist who reported in April 2016. His report concluded…

Although partly demolished in the 18th century to bring it ‘up to date’, and extensively refurbished in the 20th century to make it look ‘olde worlde’, the building retains considerable evidence for a high-status late mediaeval timber framed house of two jettied storeys (where upper storeys project beyond the lower storey) and attics in a prominent position. The house is of an unusually large scale. Other comparable size houses in the wider area are from much later dates.

Now that the building is free from the unfortunate results of the 20th century remodelling it is possible to see it as it really is – ‘the battered remnant of late mediaeval construction work on the grand scale carried out by an unusually wealthy owner’.

In 1478 Helmsley was sold to Richard, Duke of Gloucester, later Richard III; it reverted to the de Roos family on his death. The name of the subsequent hotel is suggestive of a reference to this short lived but significant royal ownership.

In its latest adaptation, the building is now a shop.

3.Face to face with the past

Following our work in 2014-15 (reported in early 2016), we were pleased that Historic England were able to remove one of the coastal alum working Scheduled Monuments from the Heritage at Risk register because we had fully recorded those parts of the monument which were under threat. However, four other Scheduled alum working sites remain on Historic England’s Heritage at Risk Register despite our efforts to record some of their most vulnerable features. So what next?

Working with Whitby Museum and specialists from Historic England, we held a seminar last spring bringing together a group of dedicated people with a strong interest or connection to the coastal alum working sites – landowners, archaeologists, academics and private researchers – to review what we know about the alum industry, to decide what we don’t understand and to look for a way forward to manage the risk to the sites under threat and ensure that we do not lose the valuable information held within them. One of the ideas emerging from the seminar was a further excavation project with an emphasis on engagement and interpretation as well as research.

Archaeological excavations take considerable planning and funds to ensure that they are carried out to a high standard and achieve objectives without causing accidental damage, so it can be a slow process getting started. We are now working towards setting up a project to investigate one of the sites which we didn’t include in the investigations in 2014-15 – the alum works at Stoupe Brow, near Ravenscar. An extensive system of reservoirs and water leats (dug channels) was revealed on the nearby Fylingdales Moor after the 2003 wildfire and we know that this water management system supplied the needs of the alum processing at Stoupe Brow, but other than that we currently know very little about this site. Historic England recently completed a topographic survey of the earthworks so we can now see how the site was laid out, but not how it operated. The site still includes its alum house (where the final processing to produce alum crystals was carried out) and there is still a general gap in knowledge when it comes to how alum houses functioned. As well as trying to discover more about the practical operations at the site the project will record the structures which are currently being gradually lost over the cliff edge. A big advantage of this particular site is that it is more accessible and less dangerous compared to some of the other coastal alum working sites – providing great opportunities for volunteers and visitors.

The first stage of the project is producing a project proposal which will outline what we want to do and how much it will cost, and this is expected by the end of this winter. The next step will be using the proposal to generate partnership support and seek funding. It is early days yet, but we hope this will develop into an exciting project – watch out for further posts as our plans progress.