We were back at Warren Moor Mine within weeks of completing the lime mortaring of the winding engine bed, but this time to carry out an archaeological excavation. Five Land of Iron volunteers and two members of staff investigated two trenches dug across the ditch on the site. One trench was between the winding engine bed and the downcast shaft, and the other further upstream, close to the boiler house and chimney. The purpose of the excavation was to build upon the information left to us by those who built and operated the mine site, and the knowledge gained by John Owen and his team from their 1970s investigations.

Warren Moor Mine was only in use for a grand total of nine years, on and off, between 1857 and 1874. The land was first mined by a John Watson from 1865 to 1868 as part of the Warren Moor Mine Company Ltd. After being taken back by the Kildale Estate (land owners), in 1872 – once the price of iron had risen – a new company, the Leven Vale Company Ltd took out the lease. They further invested in the mine, even building a row of stone workers cottages. However, in 1874 the Leven Vale Company Ltd also failed. These short periods of tenancy at Warren Moor Mine were likely due to the poor quality of ironstone which made deep mining unviable.

105 years later John Owen, an enthusiastic industrial archaeologist, and his team undertook an excavation of the site. They not only investigated the standing buildings, but also explored the upcast and downcast shafts and the pumping engine, providing us with detailed diagrams of the interiors of the structures and how they may have worked (Owen’s report can be found here).

What we got up to this time

This excavation was on a much smaller scale than that carried out recently at Combs Wood, with only two trenches around 1 metre wide and 2 metres long to start with. One purpose was to investigate the bank that ran along one side of the river (Leven). It is thought that the bank had been built up by Owen to change the course of the watercourse in order to reduce the damage being caused to the structures. Another purpose was to investigate the retaining wall around the winding engine bed, to discover its thickness and materials used in its construction, and whether there was a direct relationship to the downcast shaft. 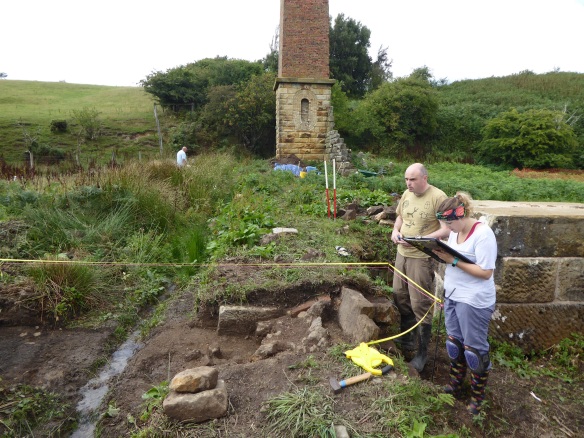 Most of the findings from the trenches were in line with Owen’s previous excavations. In the first trench next to the engine winding bed we uncovered the extent of the retaining wall. There was also a lot of evidence of burning with large lumps of slag (metal waste) and a compacted surface layer. We made the decision to extend this trench after we uncovered the corner of a large worked stone. This stone sat just below the topsoil and appeared to be a block from the winding engine bed. This raised a few questions for us – what was this stone doing here on the other side of the retaining wall? had it been placed here purposefully or just discarded?  We also dug two sondages (test pits) to get a full profile of the layers in this trench.

The second trench, up near the standing chimney, was extended far beyond its original dimensions. The aim of this trench was to explore the embankment. Upon removal of the topsoil we found the embankment to be a roughly piled brick feature. However, the more we revealed of the brick work the more we saw a structural pattern emerge. Then, unexpectedly, one of the volunteers revealed two stone door jamb bases, proving without a doubt that there was a previously unknown building! Unfortunately, this was all discovered on the last day, so we weren’t able to explore it any further at this time. This trench also contained the same burnt compacted layer and slag deposits that were in the first trench.

So what happens next?

Another excavation has been scheduled to establish the dimensions and purpose of the newly discovered building!

The volunteers group will continue to maintain the site. In addition, contractors will be working on site into next year to carry out conservation works and make the site safe for public access and enjoyment.

1 thought on “Warren Moor Mine: Part Two – the excavation”