Butterfly species are significant indicators for helping us understand the health of the environment and its ecosystems – that’s because butterflies respond rapidly to changes in habitat and climate. By recognising how butterfly populations are faring we can better appreciate how the wider environment is doing.

Butterflies and moths (Lepidoptera) also play a vital function as pollinators, as part of the food chain, and as a particularly beautiful and delicate facet of the natural world.

Habitat specialist butterflies are particularly sensitive to change. The Pearl Bordered Fritillary has suffered substantial declines in recent decades and so is now a UK Biodiversity Action Plan Priority Species. Its caterpillars feed upon violets, most often Common Dog Violets, and crucially the violets must be in a hot microclimate in order for the caterpillars to develop successfully over winter. Bracken litter is ideal at creating such a microclimate and so conservation of this species requires grassy habitat where bracken, scrub and violets are all present. In the North York Moors this butterfly species is found in only one location.

The Small Tortoiseshell, as a generalist, can cope with many different habitats but most often where nettles grow in abundance as the caterpillars feed upon the common and small nettle. This butterfly is one of our most widespread species, often glimpsed in gardens, but there is concern for a decline in species numbers recently due to the sensitivity of all butterflies to weather and climate.

Fluctuations in UK butterfly populations are common between years due to the different weather conditions through spring and summer. In 2017, the UK Butterfly Monitoring Scheme (UKBMS) showed the seventh worst year ever in UKBMS recording because a cold spring and wet summer causing butterfly species to struggle. It is expected that butterfly numbers should do better in 2018 because of the mainly dry summer, so far.

The UK Butterfly Monitoring Scheme looks beyond the short term and draws out the trends over time:

Suggested reasons for declines in butterflies include more extreme climatic events, the ongoing loss and fragmentation of meadows, neglect of previously coppiced woodland and the increased use of pesticides. The paving over of gardens is also linked to declines particularly in towns and cities.

Certain lepidopterans, like the Painted Lady butterfly, migrate to follow the sun which is so important to butterflies. The movement and extents of particular species are now altering due to climate changes. Within Britain as the climate warms the extents of particular lepidoptera species are moving north where habitats and habitat connectivity allow.

Unimproved grasslands, including meadows, support more species of butterflies than any other single habitat in Britain. Grassland with low grazing or no grazing in the summer months allows wildflowers to flower and, very importantly, to set seed. A balance between grassland and natural scrub is helpful – scrub can provide shelter, respite, breeding areas and also a place for hibernation for butterflies. By managing such sites appropriately, unimproved grassland habitats can help sustain surviving butterflies. 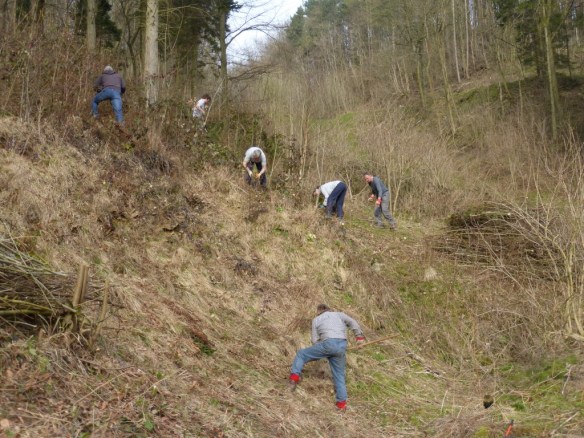 But just like for bees, if you’ve got a garden with plants, you can help butterflies too. There are butterfly friendly nectar rich plants such as Buddleia, Lavender, Marjoram and Honeysuckle , and leaving fallen fruit to decay under your fruit trees provides sweet fruit juice for butterflies. If you’re lucky you might get to see a butterfly using its extraordinary tongue-like proboscis to collect the juice.

Butterfly Conservation‘s annual butterfly count runs from 20 July to 12 August this year. The nationwide survey has become the largest butterfly survey in the world.  If you’d like to get involved visit http://www.bigbutterflycount.org/ which has lots of useful information and resources to help you.

3 thoughts on “Colouring in the summer”