As mentioned previously, the River Esk in the North York Moors is the only river in Yorkshire with a Freshwater pearl mussel population Margaritifera margaritifera. The population is estimated to be comprised of approximately 1,000 individuals and is in drastic decline, so much so that it is on the verge of extinction. The decline is due to a number of linked causes such as water pollution, choking of the river bed by sediment build-up, deterioration in fish numbers and habitat degradation. 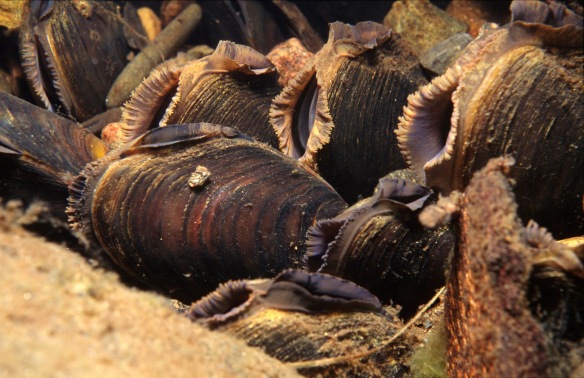 We’re working to improve the riparian habitat and so help secure the local population of Freshwater pearl mussel in the River Esk. We recently sent a sample of mussel shells from the Esk* over to the Swedish Natural History Museum in Stockholm, in order to determine the age of the mussels in the River Esk. The maximum age of Freshwater pearl mussels in the wild has been shown to vary considerably, from a low of 35 years in Spain (warmer, lower latitude rivers) to over 200 years in arctic areas (colder and high latitude rivers). Information from the ageing study would tell us how long we have left to save the Esk population from extinction and help identify the approximate time when the River Esk mussel population went into decline.

Dr Elena Dunca from the Swedish Natural History Museum sectioned (cut though) the shells supplied and then counted the growth lines on the mussel shell using a high powered microscope. 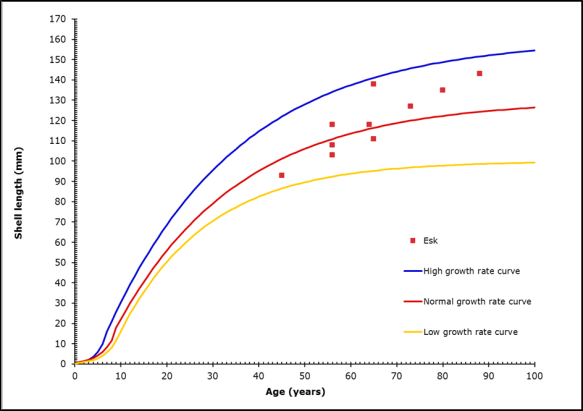 This age/length graph will allow us to age fairly accurately any mussels we find in the wild in the future just by measuring them.

A total of 10 shells were aged by Dr Dunca, and the graph below shows that the mussels sent to Sweden ranged in age from 45 to 88 years of age.  The mussels in the River Esk also showed normal growth rates.

Length frequency graph of mussels in the River Esk

The best hope for our mussels is for them to start to successfully reproduce again. We’re working with the Freshwater Biological Association (FBA) who are carrying out captive breeding work in the Lake District. We hope to re-introduce the captive bred young Esk mussels from the FBA Facility back into the Esk once the riparian habitat is restored enough to sustain them, and so ultimately stop this species from becoming extinct in the wild (of Yorkshire).

* Please note – No mussels were harmed in the making of this study! We used empty shells that were found on the banks of the Esk.

Thanks to our funders at Biffa Award, for their support to carry out this vital research work.

Biffa Award is a multi-million pound fund that helps to build communities and transform lives through awarding grants to community and environmental projects across the UK, as part of the Landfill Communities Fund.