A hundred years ago the First World War was into its fourth calendar year with no end in sight; Germany announced on 31 January 1917 that unrestricted submarine warfare would commence the following day and all ships in the war zone would become targets… 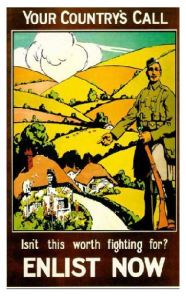 It is very difficult for us now to appreciate the full horror of what the servicemen who fought in the war experienced. Similarly we can only begin to imagine what it must have been like for those at home left behind without fathers, husbands, brothers and sons.

In the aftermath of the First World War thousands of built memorials to the dead were erected across Britain. These communal memorials acted as shared totems for society suffering devastating loss and in the face of the official policy of not repatriating the dead. They provided an embodiment of the common grief felt and the validation of sacrifice, and still today provide a tangible reminder of the real impact of war. Whereas the huge numbers of dead and injured are difficult to grasp, the individual names of the local people lost are poignant and tangible.

War Memorials draw particular public interest and warrant serious consideration for listing. Historic England is particularly keen during the centenary of the First World War to increase protection of unlisted memorials. Following on from the listing of the Commondale Shepherds’ Memorial last year, we are pleased that two further war memorials in the North York Moors have been afforded Grade II listed status as part Historic England’s drive to protect for posterity these meaningful and evocative structures.

Glaisdale War Memorial was unveiled on 4 December 1920 by Major General Sir James K Trotter, FCB, CMG. It is an elegant example of a Latin cross set on a tapering octagonal section shaft and displays a high level of craftsmanship with carved decorative details and fine lettering. Its prominent location on a small green with expansive views north down Glaisdale contributes to its impact in recalling the memory of the dead and where they belonged. The plinth at the base of the shaft reads ‘TO THE MEMORY OF THE MEN OF GLAISDALE WHO FELL IN THE GREAT WAR 1914-1919 JESU BLEST GRANT THEM IN THY LOVE TO REST’. There are thirteen names: John Boas, William J M Child, James Jefferson, John Pearson, Ralph Scarth, Charles E Scanlon, John H Scarth, Frederick Scarth, Francis R Scarth, William Ward, Ernest Wilson, Pennock Winspear, Harry Winspear.

The Commondale War Memorial was unveiled by Lord Guisborough at an ecumenical ceremony held on 31 August 1921. It was designed by WH Earl of Danby and made by J Ford of Castleton. The memorial commemorates nine local servicemen who died during the First World War including the two shepherds commemorated by the aforementioned Grade II listed Shepherds’ Memorial.  The names are Thomas Monk, Samuel Lawson, Thomas Gibson, Robert H Leggott, William Hill, Frederick W Robinson, Charles E Foster, Alfred Cockerill, David Johnson. It comprises a stone Latin cross on a short

tapering square-sectioned shaft which rises from a plinth set on a four-stage square base. Set into the plinth are unusual, brown salt-glazed stoneware tablets probably made by the local London and Cleveland Fire Brick Co Ltd Brick and Pipe Works. On the main facing and rear tablets are stamped the words ‘IN HONOURED MEMORY OF THE MEN OF COMMONDALE WHO GAVE THEIR LIVES FOR GOD, KING AND COUNTRY, IN THE GREAT WAR 1914-1918. THEIR NAME SHALL LIVE FOR EVER AND THEIR GLORY SHALL NOT BE BLOTTED OUT. LEST WE FORGET’.

For anyone interested in finding out more about the war memorials in the North York Moors and the men commemorated please visit the Roll of Honour website.  For communities wishing to carry out repairs to their War Memorial it’s worth contacting the War Memorials Trust as grant aid and advice are often available. For further advice about how to apply to have a War Memorial listed please contact the National Park Authority’s Building Conservation team on 01439 772700.

1 thought on “Lest we forget”