An intake is a parcel of land on the fringes of the moorland which has been “taken in” from the moorland and brought under cultivation i.e. farmed, usually by stock grazing. An intake is often separated and demarked from the moorland with drystone walling using the materials to hand. As a habitat these intakes are often a mix of acid grassland, wet rushy areas and remnant areas of heathland species such as bilberry. There are farms on the North York Moors that have the word intake in their name such as Riddings Intake in Westerdale where the farm holding is nearly all intake.

Inbye land is further down from the moorland, usually closer to the farmstead. Inbye is often the most productive land on an upland farm holding and is used for grass production (hay/haylage/silage) and sometimes arable. Inbye can also provide winter grazing as conditions on the higher more remote areas of the farm, the intakes or the moorland beyond, become too harsh for livestock.

Ironstone is a rock that contains minerals with an iron element. In the 19th century if the iron elements could be extracted the rock had a value. The ironstone in the Jurassic mud stones of the North York Moors and Cleveland Hills was close enough to the surface to make it relatively easy to mine, coal and limestone resources for processing were available nearby, the same entrepreneurs processing the iron were involved with the development of the railway network, and together this made exploitation worthwhile for a short lived period. The first ironstone mine in the area was Hays Mine near Grosmont which opened in 1837; by 1863, 78 of the 108 blast furnaces in the north east of England were using iron primarily from the North York Moors/Cleveland Hills. Most of the ironstone was of a low grade with a high phosphorous content – magnetite (a much purer iron ore) was discovered in Rosedale in the 1850s but it proved to be the exception and the seams were quickly worked out leaving lesser grade ironstone to maintain the industry here. The development of the Cleveland Practice in iron making in the 1860s meant that the problem of the phosphorous content became surmountable for a while and boosted the value of local ironstone. Because of the low grade it was economically advantageous to calcine the ironstone in blast furnaces close to mine sites rather than pay for conveying the unwanted dross as well, and so the resulting pig iron was then transported by railway to the developing town of Middlesbrough and its emergent steel industry.

The financial viability of the industry and the companies involved was somewhat helter-skelter. After the initial rush and a period of consolidation for the local industry, better quality iron ore imports and decline after World War 1 saw the last working ironstone mine in the North York Moors close in 1927.

The impacts of the ironstone industry on the North York Moors’ landscape and communities are a major focus of our This Exploited Land Scheme.

Jet is fossilised waterlogged wood which has been buried between sedimentary rock layers and compressed over millions of years. Buried in isolation and enriched by organic oils jet is formed instead of fractious coal. The wood was mainly from a type of monkey puzzle tree Araucariaceae which grew when the North York Moors were warmer than they are now; plant cellular structures can be seen in real jet.

Jet is only really used for one purpose – ornamentation. The best jet is always pure opaque black. Whitby Jet is a high quality hard jet formed in saline water and so easy to work. The town of Whitby was at the forefront of an upsurge in the popularity of jet jewellery – following the fashion for mourning set by Queen Victoria after the death of her husband Prince Albert in 1852. Jet had previously been collected out of the cliffs or from the sea shore but the heightened demand meant mines were opened across the north of the North York Moors to the west of Whitby; this line is thought to have been the edge of a salt water swamp some 180 million years ago. The enthusiasm for mourning became a social occupation – a widow was expected to wear mourning i.e. black for two years after the death of her husband, although many remained in black for the rest of their lives. Jet was the perfect accessory for the shrouds of mourning. 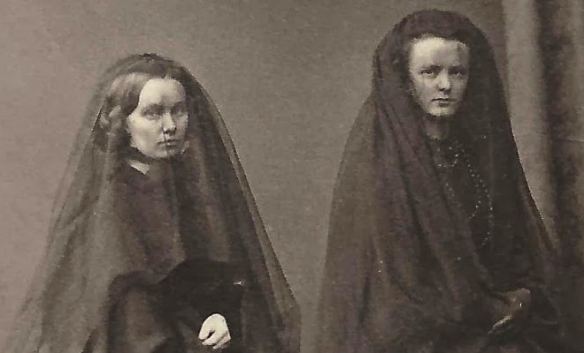 Whitby Museum has a fine collection of local jet jewellery.

John Bunting (1927 – 2002) was born in London and educated at Ampleforth College on the edge of the North York Moors. The area made a considerable impression on him and he returned to the College to teach art in 1955. He also taught at the York School of Art, and later became sculptor in residence at Ampleforth. Without doubt, his religious faith was central to his work.

In the 1950s John Bunting bought a small piece of land on the edge of the ridge above Byland Abbey and on it he created the War Memorial Chapel . He renovated a derelict farm building on the site himself with the help of a Mr Winspear of Oswaldkirk.

The whole chapel is a work of art. The outside and inside commemorate the dead, in particular four named alumni of Ampleforth College, and the peace the dead sacrificed themselves for. The recumbent stone soldier inside the Chapel wearing WWII commando boots connects the modern age with the past, echoing a tomb of a mediaeval Catholic knight.

The Chapel is also known as the Scotch Corner Chapel; it was round about here that in an earlier conflict the Scots defeated the English in battle.

The Chapel is occasionally open to the public.

There are two genera in the rush family common to the UK, luzula and juncus. Rushes can easily be confused with sedges, and even some grasses. As a rule of thumb, grass stems are usually cylindrical and hollow, sedges are triangular and solid whilst rushes are round and filled with pith – hence the common adage ‘sedges have edges and rushes are round’.

Rushes are significant for a variety of animal species. Snipe often build their nests at the base of a clump of rushes near water, whilst meadow pipits feed on the seeds in winter. Lapwing, curlew and redshank also benefit from the damp pasture on farmland where rushes can be found. Rushes are an important food source for butterflies; the Large Heath butterfly feeds on Jointed rush.

Semi natural rush pasture is usually dominated by rushes. The UK priority habitat – purple moor grass and rush pasture – is found in the North York Moors, on or around moorland and in patches on damper ground around flushes or hollows on inbye land. Rush pasture can be managed with light to moderate grazing. The ideal level keeps the Juncus and Molinia caerulea (purple moor-grass) from becoming dominant and allows other species to flourish in these more vigorous swards. Occasional poaching caused by grazing stock can have the beneficial effect of creating varied soil surfaces and bare ground, which can be colonised by the smaller plants. However, as always, too heavy a grazing level will have a negative impact on the botanical interest. Draining rush pasture removes the vital element of water and will modify the habitat leading to the loss of specialist wetland plants.

Common Juniper is a coniferous shrub or tree which is both evergreen and perennial. It is also a dioecious plant – plants are either male or female, not both as with many other plant species. It often lives to 100 years and can grow up to 4 metres in height, though it has been recorded at heights of up to 10 metres. It grows in a diversity of forms including as an upright bush, as a low-growing mat or a towering spire. It is typically found on moorland/heathland/downland and in pine and birch woodland habitats. It is one of only three “native” conifers in the UK (alongside Yew and Scot’s Pine).

Thirty-five insects and three mites are specifically associated with Common Juniper, such as the Juniper carpet moth (Thera juniperata) and the Juniper pug moth (Eupithecia pusillata). Juniper can also provide an important food source for berry-eating birds such as thrushes, fieldfares and waxwing who help spread the seed that passes through them. Juniper berries have 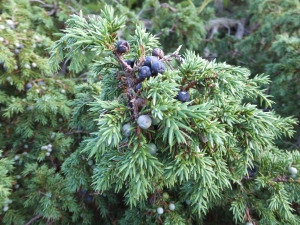 long been exploited by man too, for their flavour, fragrance and presumed medicinal properties.

Juniper is becoming increasingly rare. There are a small number of plants in the North York Moors. The population here is fragmented, and as Juniper is dioecious to regenerate both genders must be close enough to one another so that the wind-borne pollen of male plants may reach and
pollinate a receptive female.

Otherwise a population has no chance of successfully reproducing and will eventually die out. Juniper seeds become less viable with age, and natural regeneration of Juniper is also vulnerable to moorland management and grazing. Between 1990 and 2012 over 1750 new Juniper plants propagated from local seeds and cuttings, were planted in the North York Moors through a volunteer initiative. The local Forestry Commission have also been planting Juniper on their holdings, for instance at Bumble Wood. The threat of the pathogen Phytophthora austrocedrae means any further propagation work will need to be self sufficient within the North York Moors.

A kiln is a structure capable of holding material at temperatures high enough to effect chemical change. Quicklime (or burnt lime) is used to improve soil structure and increase the fertility of acidic soils which are common in the North York Moors. It is also used to bind and render stonework. To abstract one tonne of quicklime from limestone you’d need a lime kiln, two tonnes of limestone, and half a tonne of coal (or similar) as a fuel source. Stack the limestone and fuel in alternate layers inside the kiln and heat to 1100°C. Leave for 4 to 5 days to cool. Be careful, because the end product is unstable.

There are records of lime kilns across the southern North York Moors dating back to the medieval period. Kilns were more common in the south because this is where the limestone is. Kiln structures ranged from single basic clamp lime kilns on farmland to lines of industrial heat-efficient kilns next to limestone quarry sites. Remains of a number of lime kiln structures can still be seen in the North York Moors landscape. 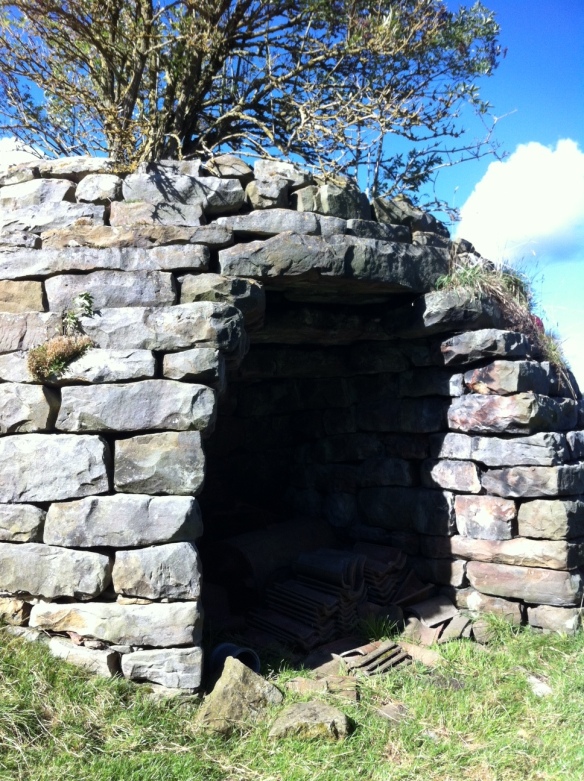