We’ve launched a new concerted effort against two of the most threatening non-native invasive plant species in the North York Moors, bolstered by funding from Yorkshire Water over the next four years. We’re chasing down Himalayan balsam (Impatiens glandulifera) and Japanese knotweed (Fallopia japonica) in the River Esk and River Rye catchments.

As well as damaging existing ecosystems and decreasing diversity, both these species tend to overwhelm other plant species along river banks and the danger from this is that during the winter when these non-natives die back the banksides are left bare of vegetation so subject to erosion which increases the sediment getting into watercourses and smothering the water habitat.

Both plants are vigorous growers and virulent spreaders. Himalayan balsam disperses thousands of seeds per plant through exploding seed pods that can propel the seeds metres from the original plant. If the plants are next to watercourses the seeds can be carried downstream to colonise new areas. Japanese knotweed spreads through its underground rhizomes which are so effective that all remnants of the plants need to be carefully disposed of because even a small fragment of rhizome if given the chance to re-root will form a new plant.

The only way to have any real impact on the plants is to tackle them systematically starting at the top of catchments and moving downstream, and repeating the control year after year to remove any vestiges of the plants. This new funding will provide a much needed boost to efforts made over the last few years. 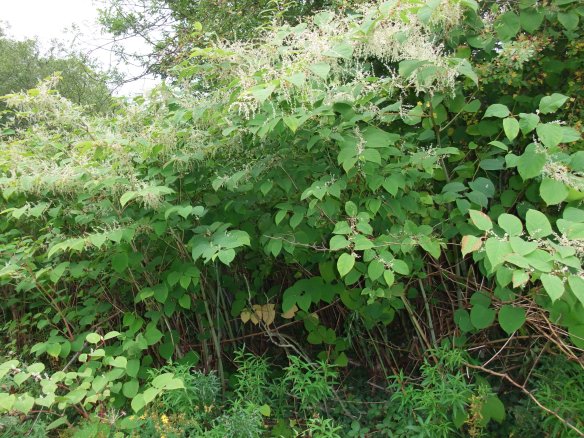 We’ll be surveying the current extent of the plants and then resurveying each year to monitor the effects of the control. We’re using tried and tested control methods – hand pulling the Himalayan balsam before it gets the chance to seed and propogate, and treating individual Japanese knotweed plants with directly administered glyphosate injections to carry the chemical down into the rhizomes. We’ll be using contractors and volunteers to carry out the work coordinated by National Park staff.

“The secret of success is constancy to purpose” — Benjamin Disraeli