It’s estimated that bees contribute £651 million a year to the UK economy – largely through pollination of crops such as apples and strawberries, of which a large percentage depend on pollination by bees. Unlike other pollinators, such as wasps, mosquitos, ants, moths, flies and beetles, bees rely solely on pollen as a food source, just as plants rely on the bees to reproduce. The resulting co-evolution of the two has meant that bees are especially efficient pollinators and can pollinate a vast range of species. These plants then provide animals (including humans) with a rich variety of fruit, nuts and seeds to feed on. Contrary to popular belief, only 4 out of the 250,000 species of bee in the world produce honey. 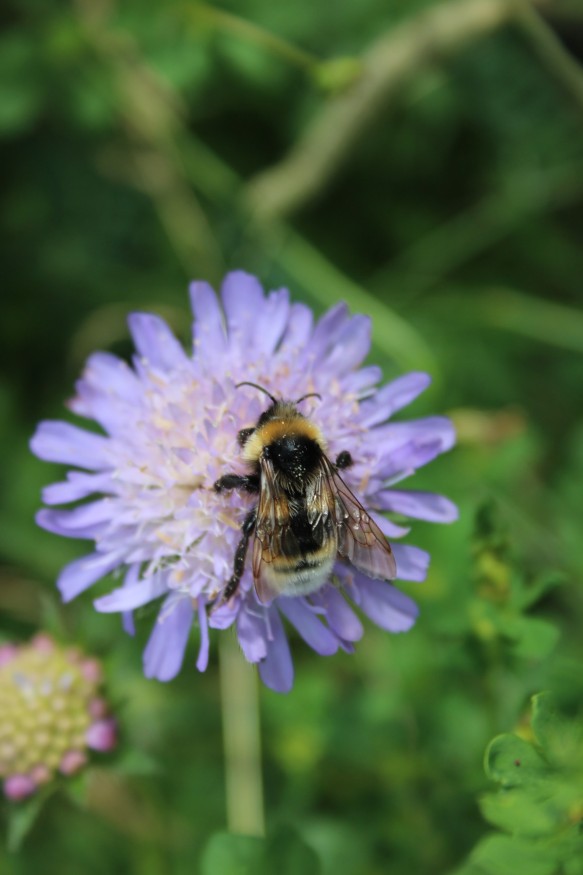 Bees are in decline due to various cumulative reasons such as intense grazing regimes, use of some pesticides, loss of field margins and hedgerows. At the moment there is a lot of interest in bees and their future e.g. see Defra’s National Pollinators Strategy. In the National Park our efforts are going into conserving, extending and connecting species-rich habitats (through the Habitat Connectivity project) to help support the migration of bees between nesting and feeding sites. The Cornfield Flowers Project and the management of species rich roadside verges help to provide the vital ‘stepping stones’ and ‘corridors’ for bees and other pollinators moving across the landscape. Gardens can do the same thing.

Bee boles are cavities or hollows built into walls to provide shelter for bee skeps which were woven baskets used before the development of bee hive structures you see today. One of our best examples is in Glaisdale and consists of a drystone wall forming the boundary between enclosed (farmland) and common (moorland) land since at least the 17th century. The north face of the drystone wall is crudely constructed from drystone rubble but the sunnier south face contains about 77 recesses or remains of recesses. These recesses vary in size and are formed from two stone dressed uprights and a lintel – in many cases the uprights are shared between adjacent recesses. Each recess would have accommodated a skep or two. The intention was probably for the bees to access the flowering heather on the moorland during the summer. The feature is associated with a farmstead just to the north which is linked to the common land by a ‘driftway’ forming a funnel like track which was probably once paved. The wall has been repaired over time indicating it was valued – it was most recently repaired in 2013/14 because it is still valued as a local cultural and historical asset.

BIODIVERSITY – what is it?

‘Biodiversity’ encompasses all life, from the birds singing outside your window to the bacteria growing on your keyboard. The interaction between animals and plants within a habitat (your garden, for instance) is called an ecosystem in which various food chains interlink. The larger and more diverse the ecosystem, the less likely animals within it are going to be affected by environmental changes, and the more likely the community is to thrive. Not only does a biodiverse ecosystem have intrinsic value, but it also provides social and economic benefit. Supply of food, water and the fresh air all rely on biodiversity in nature, as well as more obscure necessities such as the discovery of new medicines, protection against natural disasters, the pollination of crops and the regulation of our climate.

Biodiversity 2020 is a worldwide agreement, signed in 2010 by over 190 countries, to halt the decline in biodiversity by 2020. Here at the North York Moors National Park, we’re doing all we can to live up to the agreement but we can‘t do it alone; local landowners, farmers and other members of the public are involved in practical conservation to help secure and improve the local biodiversity of the North York Moors – a small but integral component of the world’s biodiversity.

The UK is home to almost half of the world’s population of the British bluebell, Hyacinthoides nonscripta. They are important enough to the nation to have been protected under the Wildlife and Countryside Act 1981 which means it is a criminal offence to remove the bulbs of wild bluebells.

It can easily be distinguished from its Spanish relation by looking at the flowers; whereas Spanish plants are upright with bell-shaped flowers on either side of the stem, British plants are much droopier, with darker, narrower flowers falling on one side of the stem. You need to watch out though, for hybrids of the two are becoming increasingly common and aren’t so easy to classify.

Bluebells are usually found in shady habitats such as broadleaved woodland and emerge in spring, flowering before the trees gain all their leaves and block out the majority of the sunlight. They’re actually extremely slow at growing so some ecologists believe that if bluebells are present and yet there are no young trees or any trees at all, it could indicate that it was once a site of ancient woodland where the trees have been lost or have declined but the associated ground flora lingers on. Where there are no trees at all anymore, remnant bluebells are known as “orphans”. 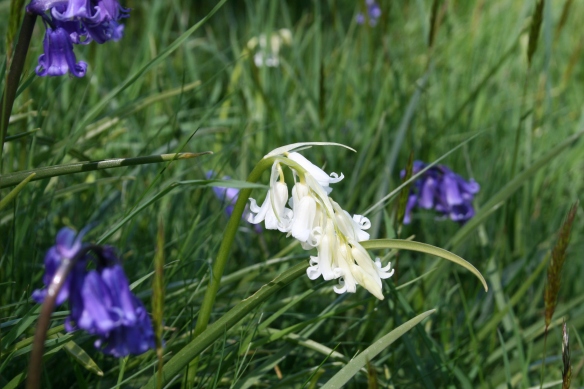 Silver buckles on his knee;

He’ll come back and marry me,

Combing down his yellow hair,

He’s ma man for ever mair,

This is a nursery rhyme, particularly associated with the north east of England. Robert Shafto was real; he was an 18th century Member of Parliament first for County Durham and then Wiltshire (he had family connections in both places). The rhyme is probably an electioneering song sung by his supporters. And this historic celebrity’s particular association to the North York Moors? He married the daughter and heir of Thomas Duncombe of Duncombe Park, Helmsley; so he and his rhyme are part of our local history.

Bracken is incredibly wide spread in temperate zones across the world and remarkably persistent. We have a bit of a dual relationship with bracken here at the National Park. Notorious here for its rapid colonisation of moorland and moorland edge habitat, bracken can often create a monoculture which can be bad for biodiversity and take over productive agricultural land, and don’t get our Archaeology Team started on what destruction bracken can inflict on archaeological features. Bracken mainly spreads through underground stems, or rhizomes, with each stem producing active or dormant buds. Whilst active buds can be destroyed by environmental stresses – such as herbicide or cattle grazing/stamping – the dormant buds will remain immune until they become active in a couple of years on a potentially never ending cycle. Annual management is needed just to keep bracken under control, and a lot of money is spent on trying to do this. 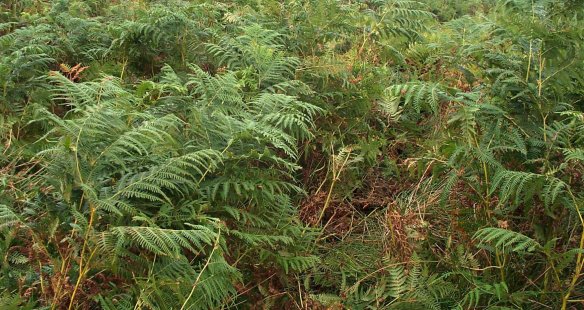 It’s important to remember though that bracken isn’t all ‘bad’. In some areas it can act as a surrogate to trees in providing cover for woodland ground flora such as bluebells and violets. It can also provide nesting, feeding and roosting habitat for birds such as Ring ouzels, and Whinchats; and shelter for butterfly eggs such as Pearl-bordered fritillary. People have long been trying to turn this prolific plant into something useful, such as bedding for animals, thatching for rooves and now as mulching.

Walter Henry Brierley (1862–1926) was a highly-reputed architect who practised in York for 40 years. Sometimes known as ‘the Lutyens of the North’, he designed buildings in the fashionable styles of the late nineteenth and early twentieth century including the Arts and Crafts and Queen Anne Revival styles. Brierley designed many public buildings such as County Hall in Northallerton and a large number of schools in York, as well as being highly sought-after by the Yorkshire aristocracy and gentry for country-house work, such as the reconstruction of Sledmere following a catastrophic fire in 1911, and Welburn Hall. 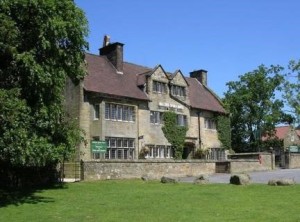 But perhaps a lesser known fact is that much of the village of Goathland was also designed and built by him – including many of the houses around the green, the hotel and St Mary’s Church were his – all of which reflect the Arts and Crafts aesthetic. These buildings are now well-known to the public because if you watched the television series Heartbeat, many of 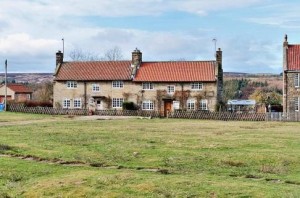 Brierley’s buildings ‘star’ alongside the actors!

Arts and Crafts architecture represented a reversion to a simpler more functional style of building which elevated craftsmanship and honesty in design and materials, influenced by vernacular buildings and folk art. The style was a reaction against the elaborate detailing and Gothic architecture of the Victorian period, with its fussy, often-manufactured ornament, but also of the classical styles based on ancient Greek and Roman architecture which had characterised the Georgian and Regency periods. The preference for local slate, handmade clay tiles and red brick, for English oak fixtures and fittings, and for the inglenook fireplace, all defined the Arts and Crafts style. Architects like Brierley used local materials and traditional styles to create something that would not jar with its surroundings, but at the same time distinctive and of its time – an ideal which the National Park promotes today.

The National Park’s Buildings at Risk Register was established in 1995 when the Authority engaged consultants to complete a structural and photographic survey of the Park’s 3014 listed buildings. The survey was subsequently updated in 2004/2005 and we are now in the process of carry out another survey with the help of our volunteers, this time using our prize winning ‘app’ and tablet to capture information electronically.

A lot of time and resources have gone into this area of work over the years and although the final figure is constantly changing (as buildings are removed from the register, more are always added) our running total currently stands at 39 buildings on the At Risk register. When compared to 200 buildings in 2009 we can’t help being pleased with such an achievement, to have helped secure the long-term future of many of the North York Moors’ most important buildings and structures. We have no intention of stopping though and will continue to work towards securing the future of all such buildings.

The success so far has been achieved in a variety of ways, often involving a collaboration between the Authority’s Building Conservation Team and the land or property owners, galvanized by the availability of grant or assistance in kind (such as the provision of professional architectural services). Other routes to repair have included working with owners to find alternative viable uses for disused buildings. The Authority only use listed building enforcement action as a last resort.

Previously on the North York Moors A to Z … A