2015 sees a number of notable 150th anniversaries in the story of ironstone and railways in the North York Moors. It turns out that 1865 was an important juncture in industrial development in this area when elements combined to boost the output and feed expansion.

1865 saw the opening of the ‘deviation’ line on the Whitby and Pickering Railway which eliminated the need for the mechanical incline at Beck Hole using winches, allowing the railway to become fully steam hauled. This 1865 re-route around Beck Hole and Goathland remains the line of the North Yorkshire Moors Railway today, one of the oldest railways in the world still running on (most of) its original route. It was at this time that today’s Goathland Station was built beside the water mill – it was originally called Goathland Mill station.

1865 witnessed the completion of the North Eastern Railway (NER) North Yorkshire and Cleveland branch which connected Grosmont with Middlesbrough and hence linked the Whitby and Pickering line into the growing rail network and connected product with market. This, too, is still running today – as the Esk Valley line.

1865 saw the opening of the extension which took the railway line around the head of Rosedale to reach the mines and calcining kilns (heating ironstone to extract the iron) on the east side of the valley. The original railway had opened 5 years earlier but this extension meant that both sides of the dale were connected and exploitation augmented. The Rosedale Railway was operational until after mining ceased in the dale in 1926 and for three years afterwards the valuable mineral rich waste from the calcining process was recovered from spoil heaps. The tracks were then lifted but the Rosedale Railway route remains open today for walkers, cyclists and horse riders to experience. 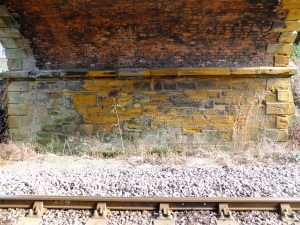 1865 is when the rail network built across the North York Moors which serviced the ironstone industry, was complete. Whether still running as a railway today or now dismantled, these railways shaped the landscape we know and brought transformation to what had previously been a remote and isolated rural area. The railways enabled easier and quicker movement – not only providing a relatively cheap method of transport for the heavy ironstone, but also making goods manufactured in the towns available to the local rural community and vice versa, stimulating the market. They also provided a passenger service – the world’s first cut price railway excursion ran from Grosmont as early as 1839. 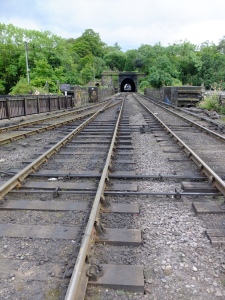 Until the arrival of these railways, heavy goods such as building stone were laboriously exported via packhorse or cart along poor roads down into Whitby on the North Sea coast from where it was loaded onto ships. The railways revolutionised the viability of quarries allowing high quality stone to be sent down the coast to London and beyond where it was particularly valued for its resistance to seawater for the construction of harbour works and river embankments. It was to export this stone that the Whitby and Pickering Railway was first built and it was during its construction that ironstone was discovered in substantial seams at Grosmont. That discovery changed the history of the North York Moors.

So for 150 years, it has been possible to travel across the North York Moors by rail. The abundance of ironstone found here in the mid-nineteenth century and the railways to carry it away cheaply led on to the development of industrial Teesside, a world centre for iron and steel and heavy engineering – Gladstone’s ‘Infant Hercules’ – steaming forward beyond the second industrial revolution into a new idealised industrial age.

This Exploited Land (TEL) is a Heritage Lottery Fund HLF Landscape Partnership Programme currently under development. It will tell the story of pioneering ironstone exploitation and iron making together with the early development of railways along the remote valleys of the North York Moors, as well as their forgotten communities.