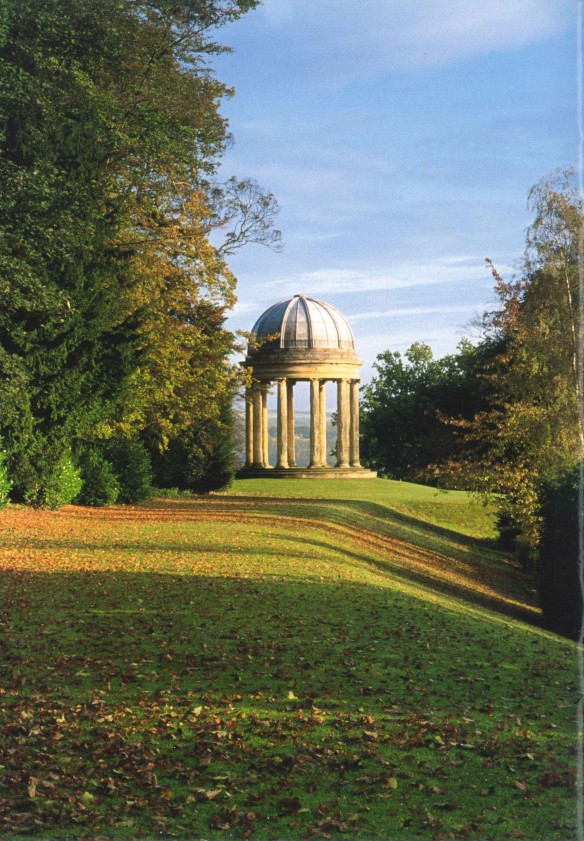 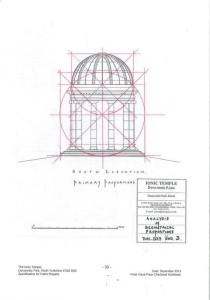 The Ionic Temple at Duncombe Park is a Grade I Listed Building in a Grade I Registered Park and Garden. Dating from the early 1720s it is attributed to Sir John Vanbrugh – the celebrated and multi-talented English architect, best known for designing the neighbouring Castle Howard and also Blenheim Palace in Oxfordshire.

The temple is classical in its construction – perfectly geometrically proportioned and ornately sculptured. It is named after the Ionic order – one of the three orders of classical architecture, the other two being the Doric and Corinthian. The term Ionic refers to the capitals on the tops of the columns, with their distinctive ram’s horn motif. 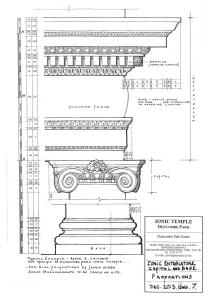 This style of architecture was developed first by the Greeks, then imitated by the Romans, and then reimagined through neoclassicism in 18th century Europe and wherever else the European “Enlightenment” spread.

Constructed of sandstone, the temple forms an open rotunda with ashlar masonry under a leaded, domed roof; a stepped podium with nine ionic columns supports a plain architrave and frieze with a dentilled cornice. 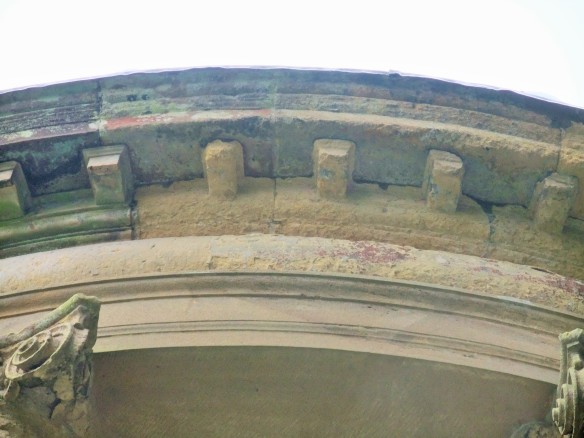 The Ionic Temple has been included in English Heritage’s Buildings at Risk Register since the Register’s inception back in 1985.

Significant deterioration of the temple’s stonework has been evident for many years and particles of stone regularly fall from the columns. There have been signs of structural movement causing stresses in the columns, exacerbated by the weathering of the column shafts. The capitals have been deteriorating and a number of volutes were missing.

The causes of this erosion are thought to be three-fold:

The local sandstone used in this temple, and the nearby Tuscan Temple and Nelson Gates on the same estate, forms a hard crust which breaks away leaving particularly soft and friable stone below.

In order to achieve substantial pieces of masonry with which to build upon, masonry was laid with the beds running vertically

instead of horizontally. As such, the layers of soft sandstone are especially vulnerable to water ingress and are gradually de-laminating like layers of shale.

The location of the temple at the exposed northern end of the Terrace has exacerbated the rate of erosion with the temple particularly exposed to wind and rain over the years.

To address the deterioration before it becomes too late – the National Park Authority has assisted the Duncombe Park Estate to secure a funding package for the necessary repairs which will cost approximately £200,000. Donations have been forthcoming from English Heritage (£120,650), the Country Houses Foundation (£50,000), the CLEARY Fund (£3,000) and the Yorkshire Gardens Trust (£1,000). We’ve donated £10,000 from our Historic Buildings Grant pot.

The repairs will involve stone repair as well as stone replacement and the replicating of the intricate carvings. Ebor Stone of York have been appointed as contractors and work is expected to be completed in spring. 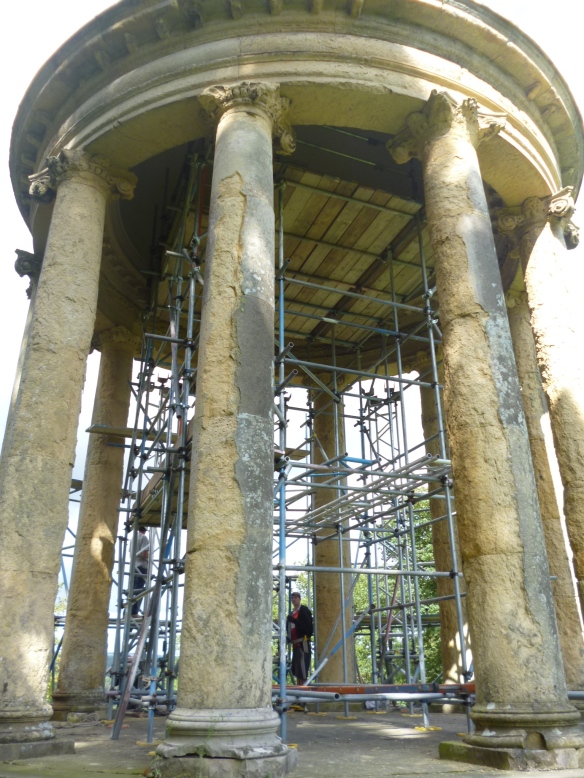 This remedial work should help secure a longer term future for this small national ornament set in the North York Moors.

4 thoughts on “A Classical Restoration”