Working in archaeology probably consists of a lot more desk work than most people imagine. There are site visits which are necessary from time to time in order to gain specific or detailed knowledge about a site – required for the provision of information or advice. Excavations are actually quite rare and generally undertaken by outside contractors since they are immensely time-consuming both in terms of the time on-site but more so in writing up the final report. Excavation also tends to destroy the features that are being investigated – so it tends to be an option of last resort.

So in terms of desk work one of the most important activities that we carry out is the maintenance and development of the archaeological index for the National Park area, on which we base most of our decisions and which we use to provide information and advice. Known as the Historic Environment Record (HER), this database contains summary information on all the archaeological knowledge that we hold. Presented graphically against a digital Ordnance Survey map background, this allows a very rapid assessment of the archaeological resource or potential of an area. Coupled with historic mapping and modern aerial photography, we have a very powerful tool to help us to understand the development and uses to which the North York Moors landscape has been put.

Below are a few examples to help demonstrate the range of information that exists within our HER. 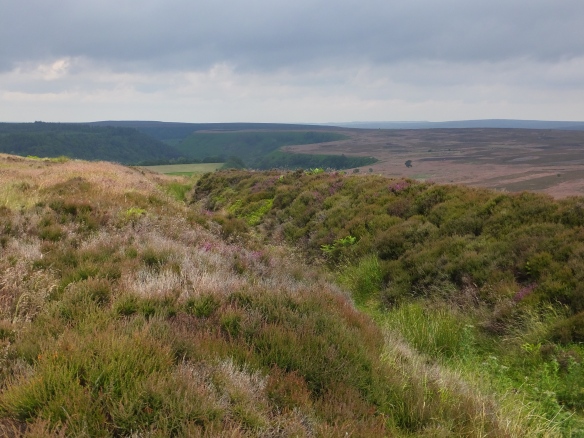 The first map (below) shows part of the Levisham Estate, which is owned and managed by the National Park Authority. The pink outline defines the area of the Scheduled Monument, the largest within the National Park, which has been designated (a process which confers legal protection) due to the archaeological importance of the range and survival of the archaeological sites it contains.

The National Park contains many moorland areas which have not been disturbed by recent agricultural activity and are consequently rich in prehistoric, and later, remains. The surviving sites on Levisham Moor illustrate the range of uses the land has been put to over thousands of years.

Areas on the map outlined in red or marked with the crossed-hammers icons represent records within the HER. Features plotted in black, with the exception of the mapped field boundaries, are earthworks recorded by the National Mapping Programme (NMP), undertaken for sections of the National Park area by Archaeological Research Services Ltd in partnership with English Heritage. The NMP pulls together existing aerial data and through analysis identifies features of interest. Activity over thousands of years is often clearer when viewed from the air rather than on the ground. On Levisham Moor particular attention has been drawn to the Bercary earthworks, a monastic sheep-farm dating from the 13th century, and the remains of a field system to their north-north-east which may be related. Away to the east of the central track there are a further series of enclosures and field systems – the enclosures which have been dated belong to the Romano-British period. 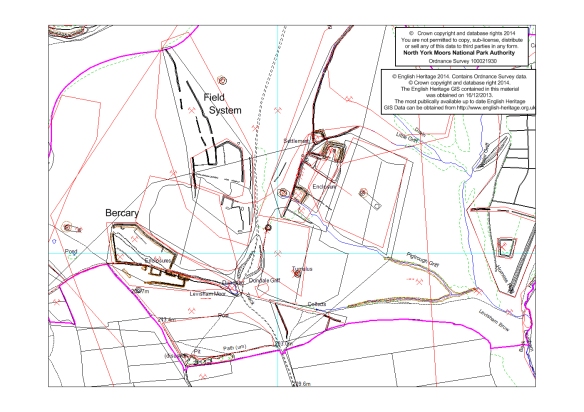 By adding our 2009 Geoperspectives aerial photographs as a backdrop (the most up to date aerial photos we currently have for the National Park), the way the archaeology fits within the landscape becomes much clearer. 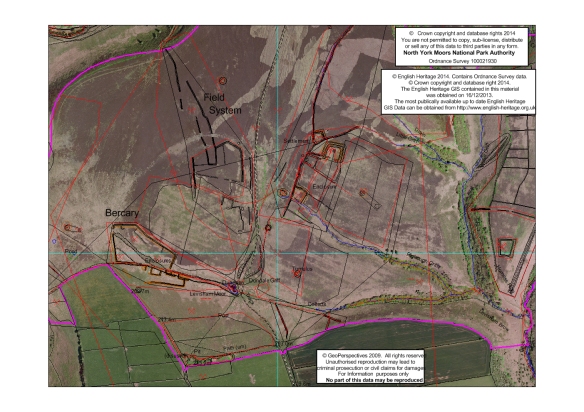 The third map (below) shows Rievaulx village and Abbey. As well as showing the data types mentioned above the map also includes designated Listed Buildings and designated Registered Parks and Gardens in blue, which indicate part of Rievaulx Terrace. The latter was laid out in c.1758 for Thomas Duncombe and linked to Duncombe Park by a picturesque carriage drive. The NMP plotted earthworks reveal evidence of the water management system around the mediaeval Abbey, as well as agricultural terraces, quarrying and even the faint outline of the monastery garden at the bottom centre of the image, just to the west of the pond. 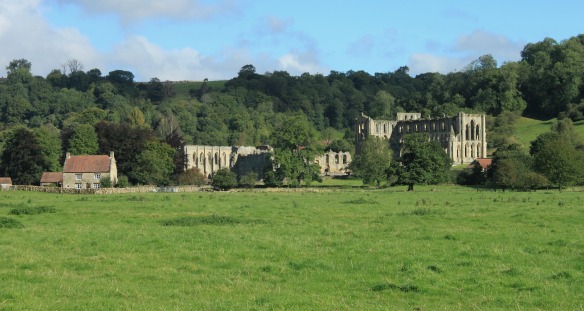 The North York Moors HER is available to be viewed – but at the moment to see everything together, you’ll need to make an appointment and come along in person to the National Park Office because it’s not all accessible on-line. The information can also be supplied for an area on request, for a charge. However the national designations – Scheduled Monuments, Listed Buildings, Register of Parks and Gardens – are available to download from English Heritage.

3 thoughts on “Understanding the past in the present”