Heritage is not just about breath-taking landscapes, bricks and mortar or rare species – it’s also about the communities who make, remake, use and visit places. The Oxford English Dictionary defines community as “all the people living in a specific locality”: they tell stories, talk about the weather, share knowledge and are always (as the academic Arjun Appadurai argues) ‘producing’ locality.

The 200km2 of the This Exploited Land (TEL) Heritage Lottery Fund Landscape Partnership area is incredibly diverse – from Battersby and Rosedale in the west, to Goathland and Grosmont in the east, taking in the Esk and Murk Esk river valleys and all the communities that live and work here.

Here are some of my thoughts about TEL communities I have encountered so far.

As an archaeologist, one of the most exciting aspects of the TEL project is the evidence of ‘lost’ communities. As industry developed in the 19th century it attracted workers, and those workers and their families lived near to the industrial sites. The historical maps from the mid to the end of the 19th century show rows of terraced housing in Rosedale, Beckhole and at Warren Moor near Kildale. Whilst a number of those houses continued into contemporary occupation, a number were ‘lost’ with the reclamation of building materials meaning that the walls remain only as low ‘ruins’, or just as earthworks. This is one of the unique aspects of the TEL project area – after the period of rapid industrial expansion and population growth, decline set in just as quickly. People came and people went. Homes were no longer used and either fell into disrepair, or the building materials sold on and re-used. This pattern of expansion and decline (rather than re-use) is one of the factors that adds to the significance of the industrial archaeology within the TEL area. 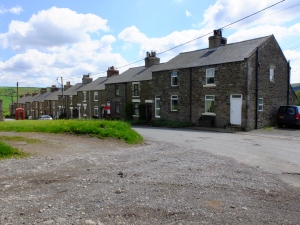 This time last year I was working on an archaeological site developing conservation approaches for structures from c. 12,000 BC, but here in the TEL area these archaeological sites are, at the most, only 150 years old. As TEL develops I hope the rich historical and social records from the Victorian period will help bring these sites, and the communities who lived and worked in them, to life in a way that is impossible on other much ‘older’ archaeological sites.

The service really made me think (albeit whilst holding back the tears as the North Skelton Brass Band played Abide with Me and Jerusalem) about the close affiliation between people and place. About the distinctiveness of different communities linked with the different mines, and how those communities fundamentally changed when industry shifted. This is just as it would have been within the TEL area where the industry developed earlier and faded sooner (at the latest by the 1920s).

What does heritage mean to you?

One of the tricky things about developing a heritage project is that ‘heritage’ means different things to different people. Each person may value something quite differently to the next person. So whilst communities are distinctive, within each there will be a diversity of opinions about what is important and therefore how it should be looked after.

The Heritage Lottery Fund defines community participation as; “involving people in the development of the services, sites and spaces that they use or are affected by”. The TEL Executive Group which is steering the development of the project, and the broader TEL Partnership Group, come from the communities within the TEL area and each person values different elements of the TEL project in different ways. They are keeping Stephen and myself busy and on our toes as the development work continues.

Much more about communities in future TEL blog posts.