By the nature of our work and the annual species we conserve through the Cornfield Flowers Project*, it can’t be helped but to follow the natural cycles of the passing seasons, and ride-out whatever challenges are presented to us through the year by the weather, the vagaries of seed germination and the occasional ravages of hares, rabbits and slugs.  Coupled with the profound rarity of many of the species we care for to begin with, it’s important to celebrate our successes, and 2013 was an especially good year.

Always at the forefront of our work are the hard facts behind the plight of these cornfield flowers. Of the UK’s rarest wildflowers that have suffered the greatest declines in the last 50 years, 60% are arable plants. Seven have become extinct during this period, and a further 54 are considered at risk. Since its creation in 1999, our Project has had the single aim of reversing this decline in the north-east Yorkshire area. 14-years on, the results are encouraging.

2013 was undoubtedly such a good year for plants due to the seasonable weather, for once! The efforts we’d invested over the years in seeding-up and managing our numerous arable headlands and demonstration beds paid dividends. Particularly noteworthy were the outstanding displays at John Middlewood’s, our volunteer farmer at Potter Brompton. Situated on ‘blow-away sand’ that quickly droughts-off, John’s fields more than any others any keenly subject to the weather, but last year was a corker for his arable plants. His sandland communities are particularly rewarding due to their relative rarity in our area and the unique species they support. From the endearing but fleeting Prickly poppy (Papaver argemone), the match-head sized blooms of Bird’s-foot (Ornithopus perpusillus), the nationally rare Smooth cat’s-ear (Hypochaeris glabra) that grows in profusion, and of course the iconic Cornflower (Centaurea cyanus), nothing disappointed this year, and the display was appreciated by colleagues and volunteers on guided farm walks.

Our other farmers and growers across the region fared similarly well, and it was pleasing to see a good show at the Ryedale Folk Museum demonstration field and nursery beds despite setbacks the preceding year. A remarkable success was also achieved with the discovery of Shepherd’s-needle (Scandix pecten-veneris) growing naturally on our volunteer farm at Hunmanby – only the third time we have recorded this Nationally Critically Endangered species in 14 years, and efforts are now underway to retain this community at self-sustaining levels. 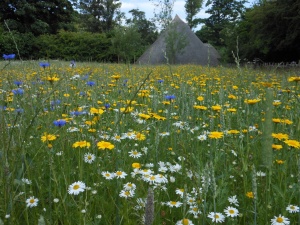 An encouraging growing season leads, most importantly for us, to good yields of seed, and last year our ‘Species Custodians’ and cornfield bed supporters reaped the benefits. Recruiting volunteers to grow plants for us in protected environments and return collected seed to us each autumn has greatly increased the scale at which we can conduct re-introductions, and makes a huge difference to germination success rates when considering the potentially high percentage-losses for any wildflowers. So successful was last years ‘crop’ that we have been able to seed-up a new 3-acre sandland site at Water Fulford near York, owned by the Carstairs Countryside Trust.  Conservation at such scales was not imaginable at the start of our current funding phase four years ago, and it is exciting to feel, for now at least, that we may be turning a new corner – expanding the range in which we can operate and the scale at which we can resist the decline of arable wildflowers, in our particular part of the country at least.

Now we’re looking forward to our last growing season in our current funded phase consolidating our achievements and securing a sustainable foothold for rare arable flora. We can never afford to be complacent though, and the survival of cornfield flowers perpetually hangs in the balance. As annual species that only grow in very dynamic and pressured environments, entire communities can so easily be lost in one year from a simple change in the arable crop management. As we look to the longer term future of these species and our Project, our hope is that we’ve managed to enthuse enough local communities to adopt and fight for these plants, and passed on sufficient knowledge to allow them to successfully care for these sometimes under-appreciated, but always deeply enchanting, true rarities.