We’ve started on a pilot scheme to survey the North York Moors National Park’s 3000+ Listed Buildings to find those considered to be most at risk from neglect, decay, damaging alterations or dereliction.

application which the National Park has developed. The volunteers are surveying eight parishes (Danby, Guisborough, Bilsdale, Old Byland & Scawton, Thornton le Dale, Lythe, Egton and Hinderwell) utilising the application on tablets, and capturing data which can then be directly uploaded onto our Historic Environment Record (HER), thus removing the need for a second

round of manual data entry which makes survey work incredibly onerous and time consuming. Most areas in the country have their own Historic Environment Record which consist of records of archaeological features, sites and historic buildings. They’re an important information hub making sure that we know what local historical assets we have.

Following completion of the survey work and submission of a final report to English Heritage in August the idea is that we roll out the survey across the rest of the National Park.

The most successful pilots will then be promoted nationwide by English Heritage as methods of ‘best practice’.

As part of the project we’ve already been carrying out work to the building records in our HER to make them more user friendly and accessible with the idea of making the whole HER available on-line at some point in the future. 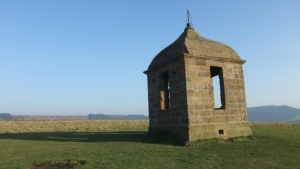